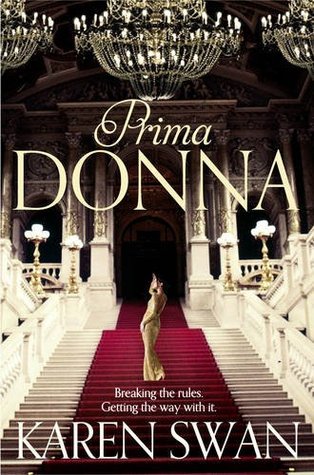 Blurb: Breaking the rules was what she liked best. That was her sport. Renegade, rebel, bad girl. Getting away with it. Pia Soto is the sexy and glamorous prima ballerina, the Brazilian bombshell who's shaking up the ballet world with her outrageous behaviour. She's wild and precocious, and she's a survivor. She's determined that no man will ever control her destiny. But ruthless financier Will Silk has Pia in his sights, and has other ideas …Sophie O'Farrell is Pia's hapless, gawky assistant, the girl-next-door to Pia's Prima Donna, always either falling in love with the wrong man or just falling over. Sophie sets her own dreams aside to pick up the debris in Pia's wake, but she's no angel. When a devastating accident threatens to cut short Pia's illustrious career, Sophie has to step out of the shadows and face up to the demons in her own life.

"Our lives are going to filled only with music and beauty from now on. We're on our way."

I have enjoyed every Karen Swan book I've read but I was nervous to start this one, perhaps because it sounded different to her other books in some way. I needn't have worried. The charm of her writing and her characters was as present here as it is in her other books. It is an earlier book and I thought that showed at the beginning, there was a fairly awkward start to the book - plenty of action and characters introduced but I thought perhaps the way the characters were introduced, with whole paragraphs of description about how they looked felt a little off.

Pia and Sophie were both very strong characters to read about, I did feel like Sophie was more likable from the start of the book but by the end I was more in love with Pia. Sophie did annoy me a bit towards the end because she just kept making decisions that just made no sense to me, the book would have been a lot shorter if she didn't keep making silly decisions. Pia on the other hand started the book very self-centered in a lot of ways, but over the course of the book she became more soft and more human. Which may have had something to do with her backstory that was revealed. This is a common part of Karen Swan's books, with her characters having tragic backstory's that are hinted at but when revealed definitely tug at your heartstrings. Pia's backstory was fairly obvious from the beginning but her way of telling the story and the way in which things were resolved were really great in my opinion. Sophie on the other hand had a story that, whilst it definitely made me feel for her, also seemed to come out of nowhere. I don't think there were any hints to it nor was there anything in her behaviour that could have hinted to it.

The romantic stories were very much put to the side of the story, which is by no means a bad thing. For one of the characters her love interest doesn't appear until right near the end of the story and for the other she battles with him a lot throughout but they don't get together until practically the last page. I liked both romances, I do almost wish they had been resolved slightly earlier in the story, so that the focus then could be on Sophie and Pia's live afterwards because I would love to know what they plan to do next. Considering so much of the book is about Pia's quest to further her ballet career and Sophie moving out of Pia's shadow and becoming an artist, there wasn't much emphasis on that at the end. And whilst I kind of understand from Pia's point of view, I wish I knew what Sophie was going to do next other than romantically.

The side characters were interesting although not perhaps that well developed. Apart from Pia and Sophie every other major female character seemed to be either bitchy or really fickle which is a trend in books I really hate. Their was a rivalry between Pia and another ballerina that I wish had been handled differently and I wish that female friendships, outside of the friendship between Pia and Sophie, were more developed or just existed full stop.

Overall this isn't my favourite Karen Swan book, I do think her writing and her stories have gotten better over time, but it was a very enjoyable read and I thought the last third of the book was very strong. I especially liked all the ballet descriptions, I do love ballet although goodness knows I could never do it. And I am always so surprised by how much ballerinas put themselves through and I loved how that was done through the book.