What is the Pondathon?

The Pondathon is a co-operative and story-driven readathon hosted and run by CW from The Quiet Pond. The aim of the Pondathon is to read books and collect points to protect the friends over at The Quiet Pond from the encroaching malevolent forces that threaten our friends in the forest. Have fun participating in the Pondathon readathon by joining one of five teams, each with a unique way to collect points and signing up! You can also follow the story of the Pondathon as it unfolds, and participants can also complete 'side quests' during the readathon to collect extra points. The readathon takes place from January 24th 2020 to March 7th 2020. More information about the readathon can be found here.

Information about Joining the Pondathon

Share your updates on your blog/bookstagram/booktube and social media. You are more than welcome to tag @thequietpond or @artfromafriend on Twitter or Instagram in all your updates! We'd love to see all of the beautiful and awesome characters that you create! 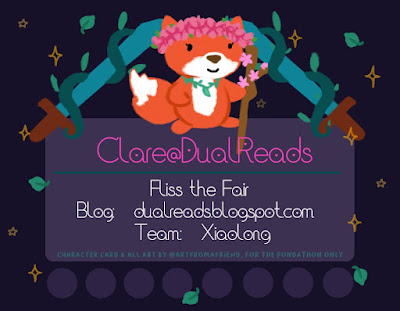 My Pond Character is called Fliss, and she's as fabulous as she is fearful! Fliss is a fox who is afraid of everything. Even so she is  joining the frontlines against the darkness that threatens the Pond. Fliss is kind and hates conflict but always does what's right.

Email ThisBlogThis!Share to TwitterShare to FacebookShare to Pinterest
Labels: readathon

The Sunday Post is a weekly meme hosted at Caffeinated Book Reviewer, it's a chance to post a recap on the past week, show the books we have received and share what we plan for the coming week. Stacking the Shelves is hosted by Tynga's Reviews and Reading Reality and the aim is to show our newest books and to see what everyone else received for review, borrowed from libraries, bought in bookshops or downloaded on to their e-reader.

You know how sometimes life just gets away from you? 2019 was the year from hell for Ann and myself (if you follow us on Twitter you'll know some of why) and we've been really bad at blogging (and reading) as a result. But here at the beginning of 2020 I'm feeling hopeful and ready to plunge back into blogging.

The Nadia Stafford Series by Kelley Armstrong: 4 stars, I'm a huge fan of Armstrong's Women of the Otherworld series but I rarely venture into her non-paranormal reads which is a shame because as this series proves they're just as good. The romance was about as slow burn as it can get (although I really could've done without Quinn) and I found even the novellas to be compelling, which is rare for me because I usually just get frustrated when they're over too quickly. Nadia was a very compelling character and Jack was great.

A Darkness Absolute by Kelley Armstrong: 4 stars, Continuing with Armstrong, I read the second book in the Rockton series. I enjoyed it even more than the first (which I'll be honest I don't remember much of) and I'm now looking forward to continuing the series when I can!
Chill Factor by Sandra Brown: 3 stars, A weird one because my experience with Sandra Brown's books are strong on romance, weaker on mystery but this was the total opposite. The mystery kept me guessing throughout, the romance felt stale too quickly. Overall compelling.
A Dark Lure by Loreth Anne White: 4 stars, This was a tough one for me. As a survivor I try to be careful which books containing rape and sexual assault I read but this had such good reviews (deservedly so). The details of her kidnapping were sometimes too much for me but the story and the characters were so compelling that I was propelled through in one sitting.

It might take us a while to get back into the swing of things but right now just taking joy in writing about books again feels incredible! So bear with us and HAPPY NEW YEAR!
Posted by Dual Reads at 05:00 2 comments: