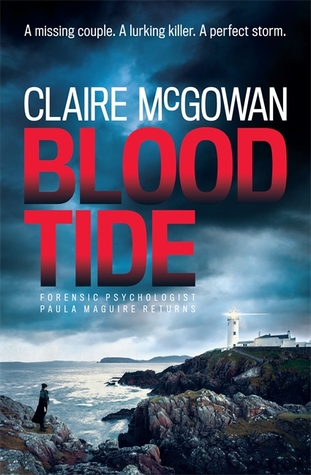 Title: Blood Tide
Author: Claire McGowan
Series: Paula Maguire #5
Format: Paperback
Source: Received from the publisher for an honest review
Pages: 352
Rating: 4.5/5
Blurb: Called in to investigate the disappearance of a young couple during a violent storm, Paula Maguire, forensic psychologist, has mixed feelings about going back to Bone Island. Her last family holiday as a child was spent on its beautiful, remote beaches and returning brings back haunting memories of her long-lost mother.
It soon becomes clear that outsiders aren't welcome on the island, and with no choice but to investigate the local community, Paula soon suspects foul play, realising that the islanders are hiding secrets from her, and each other.With another storm fast approaching, Paula is faced with a choice. Leave alive or risk being trapped with a killer on an inescapable island, as the blood tide rushes in...


Blood Tide is the fifth book in the Paula Maguire series. I haven't yet read the first four books in the series but I didn't find this to be a major obstacle in my enjoyment of this book. I did find it took me a little while to sort out Paula's friend and family dynamic but once I had I found myself intrigued about the previous books in the series and excited for this book.

The story itself is following a few different threads. The first of which is a missing couple on a remote island. This aspect was easily my favourite and I was so enthralled by the mystery. We get glimpses into the minds of one of the missing people (Fiona) in little snippets throughout the book telling her story before she went missing and these added so much tension and intrigue to the experience of reading. I found myself coming up with ever more wild (and frankly unlikely) solutions to the mystery and my mind was whirring even when I wasn't reading - I was desperate to find out how this all came together! Plus islanders who don't trust outsider/being trapped on an island during a storm are two of my favourite plot devices so that was already a win!

At the same time we are also following Paula's personal problems - a missing mother and a fiance in jail for a crime he (maybe) didn't do. These were the parts that, though intriguing, would likely have been more so to me if I had read the first four books in the series and they're why I do recommend reading the series in order. We get some bits of her mother's story through the eyes of someone who knew her before she went missing and it paints an intriguing picture of her mother and the life she led. When it comes to her fiance (or ex-fiance?) I felt the emotional punch of it even without the background.

That was another one of the things I most loved about this book - my emotional connection to the characters. So often when reading thrillers or crime I find myself detaching from the characters and focusing on the action. Here we had both. Paula felt so, so real to me and I was thoroughly absorbed in her life but I also felt for the side characters. Even characters we only spent a short time with managed to leave an impact on me.

I will definitely be going back and reading the first four books in this series. Because I need more of Paula and more of Claire McGowan's writing. This book appealed to me a lot and it definitely followed through on the promise of its blurb - there was so much tension throughout and I do highly recommend this book. If you've already read the previous books in the series you probably don't need me to tell you that you will love it - but if you haven't I do recommend picking this series up (and maybe be smarter than me and start at the beginning). 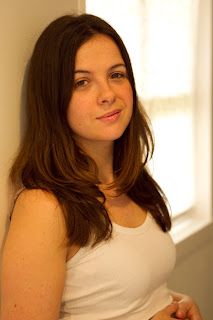 Claire McGowan grew up in a small village in Northern Ireland and now lives in London, where she runs an MA in creative writing at City University. BLOOD TIDE is Claire's sixth crime novel, and the fifth in the highly-acclaimed Paula Maguire series. She also writes women's fiction as Eva Woods.

And don't forget to check out the other stops on the tour! 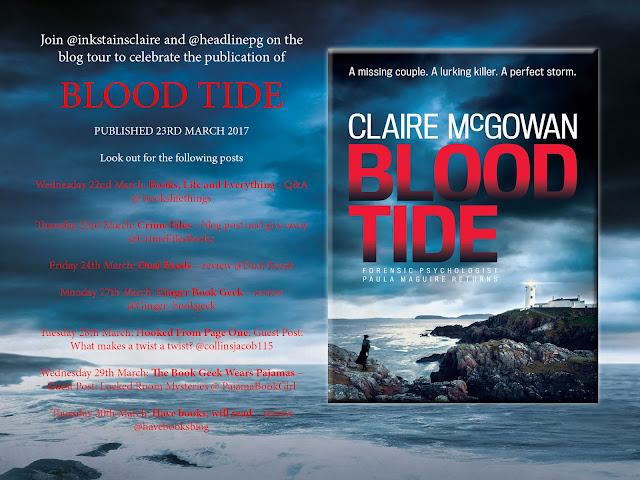 You can also find us on Goodreads (Ann and Clare), Facebook and Instagram to keep up with what we are reading.
Posted by Dual Reads at 00:15