Blog Tour: Gone Without a Trace by Mary Torjussen

1) The Murder of Roger Ackroyd by Agatha Christie

Agatha Christie’s novels were my first introduction to adult books and I read them avidly, trying desperately to work out who the culprit was and why they’d committed the crime. Through reading her novels I learned about plot devices that crime writers use, such as red herrings, and this made me realise that the novel didn’t just happen, but was planned in meticulous detail. The Murder of Roger Ackroyd was the first time I’d encountered an unreliable narrator and I remember the shock I felt as I realised the author’s deception. I re-read it immediately to work out how she’d managed to fool me and from then on I read crime novels in a much more analytical way.

In Sister we read about Beatrice and her search for her missing sister, Tess. Its theme is sisterhood – or love – and the lengths to which we’ll go to find and protect the ones we love, but it contains another theme, one which I love most in a novel, which is how much we can ever know someone, despite our close relationship to them. The novel is suspenseful throughout and the twist is so huge that I went straight back to the beginning and started again. I have four sisters and recognised instantly the intensity of feeling that Beatrice would have, yet as we all live in different cities with our own families, I realised after reading this novel that there’s the distinct possibility that I only see the aspects of them that they want to reveal.

3) Tell No One by Harlan Coben

Tell No One has one of the best twists I’ve read. It occurs right at the start, so I hope I’m not giving too much away, but when David Beck, widowed for several years, receives an email telling him to view a website at a specific time, he clicks on the link to see CCTV footage which shows his wife, in real time, walking across a road, looking up at the camera and saying, “I’m sorry.” Though this scene is early in the novel, by the time I read it my pulse was already racing. Published in 2001, it was both the first novel I’d read by Coben and the first I’d read where technology was used both to reveal and to heighten pace and pressure. This had a huge influence on me in the way I write.

4) We Need to Talk About Kevin by Lionel Shriver

Right from the start of We Need to Talk About Kevin, we know that Eva is married to Franklin, and that their son, Kevin, murdered pupils at his own school. The book is epistolary, with each letter being written by Eva to her husband. Though at the start I wondered why Shriver had chosen such a device, I became engrossed so quickly that I forgot to consider this again until the end, when her reasons became horrifyingly clear. Shriver is brutally honest about Eva and Kevin’s relationship and it’s incredibly hard to read at times, but what was obvious to me was that she knew him. She understood him. And what happened then became inevitable, in a perfect example of characters determining plot.

5) The Widow by Fiona Barton

This novel has everything: secrets, lies, betrayals, unreliable narrators and a twist that blew me away. In The Widow, like all the best crime novels, nothing is quite what it seems. This terrific story, full of dark, claustrophobic oppression, considers what it’s like to live with someone who’s committed a terrible crime. I can’t be the only reader who wondered how on earth this theme had never been dealt with before, nor the only writer who kicked herself for not thinking of it first. Fiona Barton keeps us guessing right to the very end, but more than that, has written a novel which stayed with me for long after it was finished. 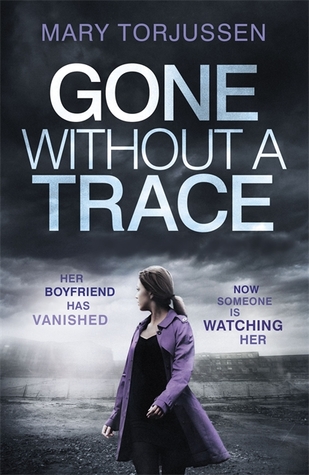 No one ever disappears completely...

You leave for work one morning.

Another day in your normal life.

Until you come home to discover that your boyfriend has gone.
His belongings have disappeared.
He hasn't been at work for weeks.
It's as if he never existed.

But that's not possible, is it?

And there is worse still to come.

Because just as you are searching for him
someone is also watching you.

Mary Torjussen has an MA in Creative Writing from Liverpool John Moores University. She worked for several years as a teacher and lives outside of Liverpool, where Gone Without a Trace is set.
Author links:
Follow Mary on Twitter
Follow Mary on Goodreads

Don't forget to check out the other stops on the blog tour as well to find out more about Gone Without a Trace!

You can also find us on Goodreads (Ann and Clare), Facebook and Instagram to keep up with what we are reading.
Posted by Dual Reads at 07:47