Clare Reviews: Once Every Never by Lesley Livingston 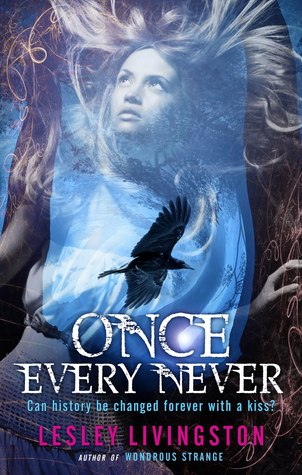 Title: Once Every Never
Author: Lesley Livingston
Series: Never (1)
Rating: 4/5
Blurb: Clarinet Reid is a pretty typical teenager. On the surface. She's smart, but a bit of a slacker; outgoing, but just a little insecure; and not exactly a mischief maker... but trouble tends to find her wherever she goes. Also? she unwittingly has a centuries-old Druid blood curse running through her veins.

Now with a single thoughtless act, what started off as the Summer Vacation in Dullsville suddenly spirals into a deadly race to find a stolen artifact, avert an explosive catastrophe, save a Celtic warrior princess, right a dreadful wrong that happened centuries before Clare was even born, and if there's still time - literally - maybe even get a date.


I loved Lesley Livingston's Wondrous Strange trilogy, so although the blurb for this wasn't necessarily calling to me I was fairly confident it was going to be a good book. And it was. Not as good as Wondrous Strange was, although I think this is an earlier book. I've just done a quick check and found that it is basically impossible (at least where I live) to get a copy of books 2 or 3 (without spending a fortune that is) so I probably won't be continuing the series. But since it works well as a stand alone I am not too upset.

The main thing that stood out with this book was the humour. I was smiling almost the whole way through, although there were serious moments. And it was such real humour, most of the time I couldn't help thinking that this was similar to joking conversations I'd had with friends.

The romance wasn't enthralling, there's a bit of a love triangle/square which I am usually against. But I never really doubted which way it would go. Another long time dislike of mine is time travel. Which... is the core plot of this book. Here's the thing; time travel confuses the heck out of me. I remember reading Tempest by Julie Cross and getting to the end and thinking "ok but if he does that then he never did any of the other things in which case he never got to the point where he did that in which case he did do the other things". Eventually the paradox hurt my head and I quit the series.

But here it kind of worked, if I didn't fully grasp the paradoxes or butterfly effects or whatever it was fine - because the book never asked me to. As Clarinet herself said "Really, are apes ruling the planet? Is it raining doughnuts? Are dinosaurs roaming the streets? No." I loved Clarinet, partly because she goes by Clare (yay!) and partly because - it was such a relief to have a protagonist who understood time travel about as much as I did. Which is to say not at all. I learned the rules along with her without feeling patronised or out-scienced.

Sometimes, when I'm reading American books I forget that what's common knowledge about English history to me, being from England, isn't to an American audience. So there was a bit of Boudicca exposition at the beginning. I rolled my eyes when Clare didn't know who Boudicca was and then realised, of course she doesn't - Ancient Briton warrior Queens probably don't make much of a difference to American history. That was the only bit of exposition there really was in the book, and it was relatively painless. Again, it was learning with the main character and wasn't patronising.

Is it my favourite book of the year, or even the month? Probably not. But it was an enjoyable way to spend a couple of hours and the humour was my kind of humour. And bonus? It brought me out of the reading slump brought on by Dracula in Love (review here).

Recommended Reads (If Once Every Never appealed to you):

Young Adult:
Wondrous Strange by Lesley Livingston: Fairies in New York, with Shakespeare and wonderful characters. Highly recommend (plus the covers are gorgeous)
Starling by Lesley Livingston: A spin off series from Wondrous Strange, this time about Norse mythology. It's not necessary to read Wondrous Strange first but I would recommend it.
Valkyrie Rising by Ingrid Paulson: Norse again. This has a very similar vibe to Once Every Never, I kept thinking that whilst reading. This was one of my favourite books read in 2014.
Non YA:
The Shadowy Horses by Susanna Kearsley: One of my all time favourite authors - she writes time split novels I can not only wrap my head around but love.
Whispers in the Sand by Barbara Erskine: I know she has written books more relevant to the Once Every Never time period, but this is the one of hers I enjoyed the most. It's set in Egypt which I love. (Egypt is one of my fictional weaknesses).

Email ThisBlogThis!Share to TwitterShare to FacebookShare to Pinterest
Labels: book review, lesley livingston, once every never