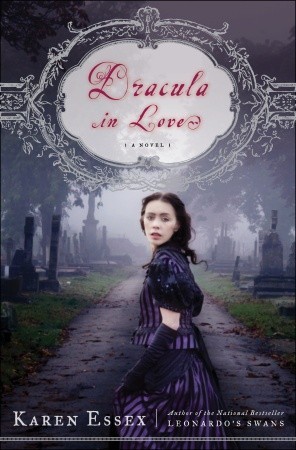 Title: Dracula in Love
Author: Karen Essex
Series: No
Rating: 2/5
Blurb: London, 1890. Mina Murray, the rosy-cheeked, quintessentially pure Victorian heroine, becomes Count Dracula's object of desire. To preserve her chastity, five male "defenders" rush in to rescue her from the vampires's evil clutches. This is the version of the story we've been told. But now, from Mina's own pen, we discover that the story is vastly different when told from the female point of view.


"I tell you this to warn you, beauty that you are with your jet-colored hair and your lovely skin more pure and delicious than the top of the cream, and those eyes of yours that stole their green from a sultan's emerald."

For the first half of the book I was confident that this was going to be a 1 star review. But then Lucy came into the story, and her part was actually interesting me. I almost wish that this had been Lucy's story and not Mina's. Shortly after this there was a (fairly brief) part set within a mental asylum. Which I found fascinating. The techniques used during this time have horrified me for a long time so I was interested to see how this was portrayed. However this was a fairly brief section of the story. I wish more time had been devoted to this.

Dracula was not really in evidence. I was pre-warned for this having read some Goodreads reviews before I started reading but seriously. He is hardly there at all, and when he is, he is the most god-awfully boring version of Dracula I can remember reading about. But even given that I fail to see how Jonathan was in any way a competition for him.

I don't really want to get into a comparison between this and the original Dracula, if only because it has been years and years since I read Dracula and I've read/seen many adaptations since. So I'm not sure how accurate I would even be. My main problem with this book is that I could see what the author was trying to do, I could see the feminism and the sexuality and all of that but it just didn't work and that made me so disappointed.

The characters (with the exception of Lucy and Morris whom I liked) were really not the sort I wanted to read about. Mina had potential but she mostly just annoyed me and as for Jonathan - good lord. He was unfaithful, treated Mina terribly, had her confined to a dubious asylum; there was pretty much nothing redeeming about him. He claimed to love her but at every turn he betrayed or hurt her. The majority of the other characters were intended to be bad. Which I wouldn't have minded so much except that they were the boring kind of bad. I felt some menace from them in the asylum but I never really felt any tension or cause for concern.

The quote I chose to start this review with was one of many (many) such quotes about the main character. I chose this particular one because it was at this point that I gave up and started to read the book from a comical standpoint. In case you are wondering by the way, this quote was delivered by a ninety year old fisherman whose speech she had described as common, and it was about five minutes after they met. And rather than thinking, "this is a super weird thing to say to someone you've just met" she thought she'd continue to meet this old guy and listen to his stories.

Also; "Quince's hair was of a single unit, a great beautiful flow of thick walnut hair that operated as one organism." I'm fairly sure this is meant to sound appealing, but it ultimately just sounds slightly menacing to me. At the very least fairly disturbing; is hair meant to be attractive that way? Am I somehow weird for not getting this or is that sentence genuinely as odd as I find it?

Here's where I recommend some alternatives for you to read:

In a Glass Darkly by Sheridan Le Fanu: More specifically: Carmilla. I don't know if you watch the youtube series (you should) but even if you don't, this is the vampire story that inspired Dracula. It's also really good.
The Turn of the Screw by Henry James: So I have a bit of a love/hate relationship with Henry James. But Turn of the Screw comes down strongly on the love side.
Wildthorn by Jane Eagland: Asylums. If you are interested in them in any way like I am, then you should definitely give this book a try.
Dracula by Bram Stoker: OK, I know it's a cliched answer to read the original (and let's face it you probably already have), it's not my favourite classic, probably not even close, but it's far better than Dracula in Love. I promise.

And finally, this is, of course, all my opinion. If you like overly descriptive prose and hair that moves as one organism, or you really wanted to see a toned down Dracula then maybe this is for you. It just did not work for me.