Clare Reviews: The Falconer by Elizabeth May 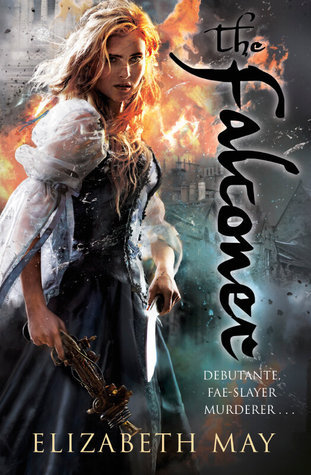 Title: The Falconer
Author: Elizabeth May
Series: The Falconer (1)
Rating: 3.5/5
Description: Lady Aileana Kameron was destined to a life carefully planned around Edinburgh's social events - right up until a faery murdered her mother.
Now between social engagements, she slaughters the fae in secret, determined to track down that faery, and to destroy any others who cross her path.
But midwinter is approaching, and a battle looms.
Aileana is going to have to decide how much she's willing to lose - and just how far she'll go to avenge her mother...

"I've memorised their every accusation: Murderess. She did it. She was crouched over her mother's body, covered in blood."

I have a complicated relationship with faery books. The badass, immoral ones - I love, and thankfully that's what The Falconer had. Faeries were, on the whole, murderous and cruel. What's even better, our main character Aileana is fairly murderous and cruel herself - even if it is purely to faeries. She witnesses a faery murder her mother and in response she trains to kill them to prevent further murders. But she also enjoys it.

I really enjoyed reading from Aileana's perspective, she may have been a killer of faeries but she was also the only daughter of a Marquess. And a murdered mother who many believe her guilty of killing. Kiaran and Derrick, two faeries who seem to be on her side, were also great characters. Kiaran provided the moody trainer part and Derrick made for great comic relief. And also made me wish I had a pixie living in my wardrobe.

I think my main problem with this book was that I read Crimson Bound earlier this year. And whilst they are not identical books, Rachelle was a similar character to Aileana and in the comparison Aileana doesn't measure up so well. In addition to this, although there was a lot of action, I never felt entirely dragged into the story. Maybe everything just happened too fast, or maybe it was just too short a book to really develop the characters enough. But I felt like the side characters were neglected. I am sure that they will be further developed in future books, but some characters, such as Aileana's friend Catherine was such an intriguing character and she made each scene she was in more interesting. Except she was in a very few scenes altogether.

There was a moment during the book where I worried it was verging into love triangle territory - but it almost side stepped that. So that I am now a little confused as to whether this is or isn't a love triangle - I am inclined to think not but it's definitely complicated. Before reading this I had been warned that there was a cliff hanger. I hate cliff hangers. I am a very anxious person and this is the reason I tend to marathon series - specifically to avoid cliffhangers. Which is particularly annoying in this case since the release date of book two The Vanishing Throne isn't until November this year (although Amazon originally tried to convince me it was September 2016!). I will almost definitely be reading book two, but that is more likely down to my own anxiety over the ending than any great interest in it.

If you like books about faeries then I would definitely give this one a go, especially if you like your heroines tough and skilled at fighting. But don't expect anything wildly original, this was enjoyable and light but not especially unique.