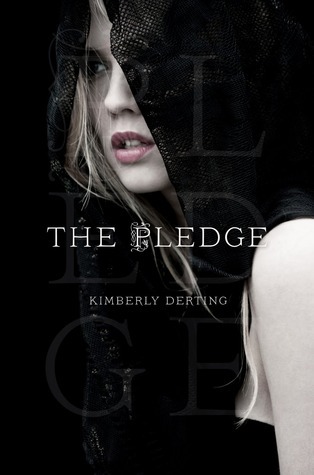 Title: The Pledge
Author: Kimberly Derting
Series: The Pledge (1)
Rating: 3/5
Blurb: In the violent country of Ludania, the classes are strictly divided by the language they speak. The smallest transgression, like looking a member of a higher class in the eye while they are speaking their native tongue, results in immediate execution. Seventeen-year-old Charlaina has always been able to understand the languages of all classes, and she's spent her life trying to hide her secret. The only place she can really be free is the drug-fueled underground clubs where people go to shake off the oppressive rules of the world they live in. It's there that she meets a beautiful and mysterious boy named Max who speaks a language she's never heard before . . . and her secret is almost exposed.
Charlie is intensely attracted to Max, even though she can't be sure where his real loyalties lie. As the emergency drills give way to real crisis and the violence escalates, it becomes clear that Charlie is the key to something much bigger: her country's only chance for freedom from the terrible power of a deadly regime.

"I loved voices, I always had. Words held meaning, but voices held emotion."

I didn’t really know what to think when I started this book because I had just pulled it out of my TBR jar and my big sister put most of the books in to my TBR; so most of them I don’t even know what they are about. I did however like the sound of it from the blurb so it was one of the first I read this month.

The main character Charlaina (or Charlie as she likes to be called) was a complicated girl with a power that she has to keep secret or she risks losing her life. She doesn’t know why she has this power. At the beginning of the book she just glides through life like the other vendor children but throughout the book things happen that change that and she develops as a character. Her love interest Max also has a secret of his own and when he meets Charlie he realises she is special and pledges to protect her. He didn’t give up and defended her as well as he could. He is a very protective character.

The plot was very well developed and I didn’t expect what was going to happen next. The only bad part about the plot was that the ending was a bit rushed and most of the exciting stuff happened in like the last 4 chapters.

The city Ludania was described really well even though it isn’t a real place in the world from the description I felt as though it came to life and was described thoroughly. It was really easy to picture the roads and the buildings and shops which made reading more enjoyable.

Email ThisBlogThis!Share to TwitterShare to FacebookShare to Pinterest
Labels: book review, the pledge