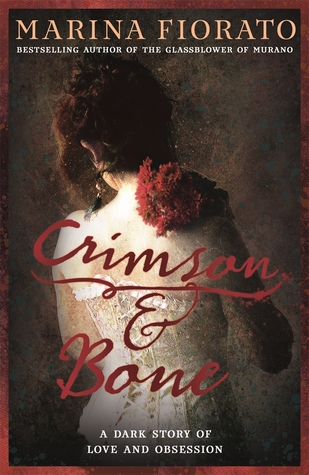 Title: Crimson & Bone
Author: Marina Fiorato
Source: Received from the publisher for an honest review
Pages: 320
Rating: 5/5
Blurb: London, 1853. Annie Stride has nothing left to live for - she is a penniless prostitute, newly evicted from her home and pregnant. On the night she plans to cast herself from Waterloo Bridge into the icy waters of the Thames, her life is saved by Francis Maybrick Gill, a talented pre-Raphaelite painter - and her world is changed forever.


Francis takes Annie as his artist's muse, elevating her from fallen woman to society's darling. With her otherworldly beauty now the toast of London, her dark past is left far behind.
But Annie's lavish new life is not all is seems - and there are some who won't let her forget where she came from...


I've been a fan of Marina Fiorato for a long, long time. I've read and loved every one of her books and I can confidently say that this is her best yet! This was compelling and dark and so, so tense right from the start and I was hooked from page one right to the end.

Annie was such a wonderful character, full of self-doubt and with a dark past and all of her actions were so understandable. I could feel her anxiety not to return to her old life, I could understand her desperation and her willingness to give Frances whatever he wanted so that she could hang on to security. I can't remember the last time I was this entranced by a character. Frances of course is slightly more complicated but the progression of his character development or rather the revelation of his character was so thoroughly fascinating and realistic.

Marina Fiorato is as good at writing settings as she is people - which means they feel alive! London and Venice are both cities I know and love and she brought them to life expertly, whilst Florence is somewhere I haven't yet been but she made me love it! It's so easy to get lost in her books because they feel so real and alive - everything is tangible and exciting and you just want to keep turning the pages indefinitely.

It's hard to know how to talk about the plot without giving something away - and I don't want to do that because the darkness at the centre is best discovered on your own. But - imagine My Fair Lady but way creepier and more intense. I started with relief and then progressed to this niggling unease like something was going to go bad soon and then slow dawning horror and finally a tense finale. It was just so wonderfully crafted.

At the beginning of each chapter you get a small snippet from Mary Jane's point of view - Mary Jane being a friend of Annie's who committed suicide shortly before the novel begins. These were the parts that caused my unease the most and definitely added to the eeriness and the sadness of the book. It also let you get to know Annie from someone else's eyes - someone who had loved her and seen the good in her in a way that Annie couldn't.

Overall this novel just stunned me. Everything from characters to plot to writing to the atmosphere was about as close to perfect as a book can get. I definitely recommend this to anyone who loves historical fiction or dark stories although it might not be for those who dislike profanity or sexual content (which you probably already gathered from the blurb).