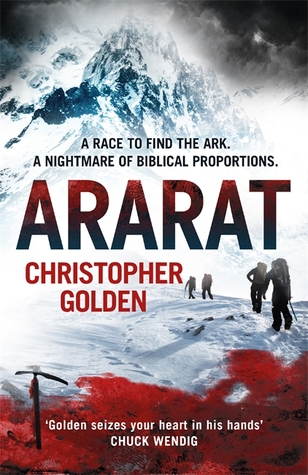 Title: Ararat
Author: Christopher Golden
Format: Paperback
Source: Received from the publisher for an honest review
Pages: 305
Rating: 4.5/5
Blurb: Meryam and Adam take risks for a living. But neither is prepared for what lies in the legendary heights of Mount Ararat, Turkey.
First to reach a massive cave revealed by an avalanche, they discover the hole in the mountain's heart is really an ancient ship, buried in time. A relic that some fervently believe is Noah's Ark.
Deep in its recesses stands a coffin inscribed with mysterious symbols that no one in their team of scholars, archaeologists and filmmakers can identify. Inside is a twisted, horned cadaver. Outside a storm threatens to break.
As terror begins to infiltrate their every thought, is it the raging blizzard that chases them down the mountain - or something far worse?


Oh boy this book. That was intense and exciting and so, so immersive. I felt cold and afraid the entire time I was reading it. Which wasn't a whole lot of time because this is a total one-sitting book. Once you start reading you cannot stop until you've reached the end! You just can't.

The characters were immediately engaging. And lovable. And real. They all had faults, so many faults and they were constantly acting in frustrating ways but ultimately I wanted them to get through this alright. I wanted them to reach a point where they could be happy and OK. If you've read/watched any horror ever then you know that wasn't a terribly likely wish. The thing with horror movies is that I often start to view characters as expendable - their deaths become unemotional and kind of just another action scene (as horrible as that makes me sound) but here I felt so much for each of the characters that each new death (and I don't think it's a spoiler to say that yes, there are deaths!) left me shocked. Literally jaw dropping at times!

It's difficult to talk about what actually happens on the mountain without spoilers. I mean deaths sure, but supernatural or natural? The blurb mentions the "horned cadaver" but how much of what follows is the human reaction to fear and how much is you know, actual horror? That's something you should definitely find out by reading and not from me because god the trip to discover that and all the events that happen along the way - it's heart pounding! There is a build-up to the plot and it definitely escalates as it goes along but there was never a moment where I was less than completely engaged.

Horror isn't a genre I read often, if only because I rarely find it as effective in novel format as I do in movies. But believe me when I say that I enjoyed this every bit as much as I would enjoy a horror movie. I was on the edge of my seat throughout. I picked this up to read the first sentence and see if I wanted to keep reading and here I am at 4am in the morning having raced through this book. Ararat is kind of incredible. Definitely a lot more than I was expecting from it and I definitely need to read more from Christopher Golden!