Clare Reviews: The Other Side of Midnight by Simone St. James 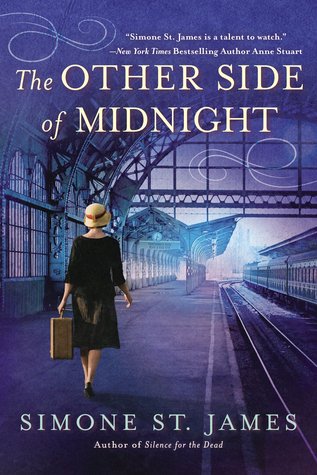 Title: The Other Side of Midnight
Author: Simone St. James
Series: No
Pages: 307
Format: Paperback
Rating: 4.5/5
Blurb: London, 1925. Glamorous medium Gloria Sutter made her fortune helping the bereaved contact loved ones killed during the Great War. Now she's been murdered at one of her own séances, after leaving a message requesting the help of her former friend and sole rival, Ellie Winter.


Ellie doesn't contact the dead—at least, not anymore. She specializes in miraculously finding lost items. Still, she can't refuse the final request of the only other true psychic she has known. Now Ellie must delve into Gloria's secrets and plunge back into the world of hucksters, lowlifes, and fakes. Worse, she cannot shake the attentions of handsome James Hawley, a damaged war veteran who has dedicated himself to debunking psychics.


As Ellie and James uncover the sinister mysteries of Gloria's life and death, Ellie is tormented by nightmarish visions that herald the grisly murders of those in Gloria's circle. And as Ellie’s uneasy partnership with James turns dangerously intimate, an insidious evil force begins to undermine their quest for clues, a force determined to bury the truth, and whoever seeks to expose it...

"I wanted to stand up and scream. In an overwhelming rush, it suddenly seemed I'd spent so much of my life in the company of the dead that I'd never lived much of a life."

I seem to be immersing myself in ghosts lately,  but of all of them the ghosts of The Other Side of Midnight are perhaps the most chilling. Ellie's interactions with ghosts were described in such a way that it made me feel increasingly sorry for her. For all she is told she has a gift she doesn't necessarily see it that way. I really liked Ellie as a character, her motivations and actions rang true for me and I was rooting for her from the start. I found myself getting angry on her behalf when people belittled her or suggested she was a fraud. And I got so invested in her story ending happily. I also found myself really liking James, there were moments (particularly during Ellie's flashbacks to before Gloria died) where I kind of wanted to shake him but mostly he was fascinating and three dimensional and I adored him.

There was a romance element to the book which I personally liked. It felt real and progressed at a good pace, there was a lot of tension between them from the start and they had a lot from their pasts to get past. Particularly what had happened between them in the past. But I relished all their interactions with each other and I wish there were more for these characters. I know that Inspector Merriken from this book was the hero in one of Simone St. James' previous books so I can only hope that Ellie or James cameo in one of her future novels!

Perhaps the most compelling relationship in the book was actually that of Ellie and Gloria. They were the ultimate frenemies and I was sad for both of them, throughout the book that they would never be able to make up now. I liked the flashbacks to their friendship and Gloria herself was such a magnetic character. Ellie compared herself unfavourably to Gloria but I think, probably, Gloria had probably done the same in reverse. I loved both characters and so it broke my heart a little.

This was a mystery and in my opinion this was the only part of the book that disappointed me. The build up of the mystery was wonderful, there was a lot of tension which kept building towards the end and there were a few genuinely scary moments when I was holding my breath and hoping for the best. But the actual resolution to the mystery fell a little flat for me. It wasn't that it didn't make sense or that the big climax scene was any less thrilling to read - it was just that I was hoping for a little something more.

If you are looking for an atmospheric novel about psychics and ghosts then definitely give this one a try. I would especially recommend this to anyone who loves Deanna Raybourn's books, there was a similar atmosphere (albeit with added chill) here. I know that in the next month or so I will be finding a way to read Simone St. James's other books. I flew through The Other Side of Midnight and I already know I will be re-reading it.