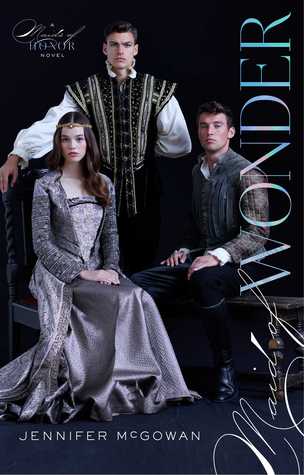 Title: Maid of Wonder
Author: Jennifer McGowan
Series: Maids of Honor #3
Pages: 326
Format: Hardback
Rating: 3.5/5
Blurb: Sophia Dee, the most unusual spy of Queen Elizabeth’s Maids of Honor, has run out of time for her psychic skills to fully manifest. A terrible new prophecy haunts Windsor Castle, and the Queen demands answers before the next doomed soul dies.


Thrust into a dangerous and horrifying competition to solve the deadly prediction, Sophia finds herself pitted against the most celebrated mystics of Europe: John Dee, her devious uncle and the Queen’s personal astrologer, and Nostradamus, the renowned prophet-seer of France.


In a court where whispers of witchcraft, poisonous plots, and grim assassins threaten her at every turn, Sophia needs answers fast. But does she dare trust Marcus Quinn, her uncle’s striking and overambitious assistant? Or, instead, should she turn to the tortured dark angel of the spirit realm, who whispers to her only of sorrow and death?


As new dangers surface and the dire prophecy sweeps toward its final victim, the five Maids of Honor prepare to do battle. Only then will the girl who so often sees the future finally discover if she can save the Crown—and herself.

"Death always starts as a whisper."

If you haven't read the first two books in this series (Maid of Secrets #1 and Maid of Deception #2) then I highly recommend them. This series follows five Maids of Honor in Queen Elizabeth's court. Each book tells the story of a different girl, although it is best to read them in order.

I had been eagerly anticipating Maid of Wonder ever since I put down Maid of Deception, Sophia, the narrator of this book, is a psychic. She can go into trances and ask "angels" questions to which she sometimes gets answers and, more often, simply gets riddles in response. In the previous book she had been a very quiet presence and I don't feel like I ever got a real sense of who she was. In Maid of Wonder she definitely came into her own. Throughout the book she insisted she was going to "show them all" but she had to walk a dangerous path. If she showed her powers too much then she could be taken as a witch, but if she doesn't show any then she is of no use to the Queen and could be married off. This was one of the things I really enjoyed whilst reading the book. There was a very real sense of how trapped Sophia was. As long as she stays at Court she isn't safe but there is no way she can leave without the Queen's permission and there is no way the Queen will let her go. It made me very excited to keep reading and find out if things went Sophia's way.

Maid of Wonder is quite a bit shorter than the previous two books and unfortunately this does show negatively in the story. The element most affected was the romance between Sophia and Marcus. It bypassed insta-love and went into "I've loved you since before I knew you" territory which I wasn't a huge fan of. I felt like, where the previous two Maids had realistic and slower building romances, this one just moved way too fast for me to feel any connection with it. Marcus himself was not a character I really warmed to either. I appreciate that he was in a difficult situation, like Sophia but he never really showed any consideration for the situation she was in. If he wanted to court her, he would ignore all her protests or rational arguments about the fact that she will be the one punished by the Queen and forge ahead.

The historical details, as in all the books, were really great to read about and I especially loved the introduction (however brief) in this one of Nostradamus, he is someone who definitely interests me. John Dee felt sort of vague, he was menacing but he never felt insurmountable. It's Cecil who really comes across as the true threat to all the girls and he has done in all the books so far, I always tense up when he enters the story. He is supposedly on their side but he does not treat them that way!

Like all the previous books this one had a bit of an unfinished ending, I feel like the last book in the series will have all the loose threads tied together but with each book being narrated by a separate person I don't see as much of the characters as I would like. Rafe from book one made a brief appearance but I would have liked to have seen more of him with Meg. I am not sure how the final book is going to pull together all the final threads of each individual story if it is only narrated by one girl, but then it doesn't seem fair for either Jane or Anna to have to share their book will all the other Maids either. I will be very interested to see and I will definitely be reading books 4 and 5 and I will be keen to see what else Jennifer McGowan may write in the future.