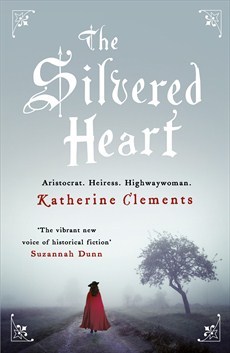 Title: The Silvered Heart
Author: Katherine Clements
Source: Finished copy received from publisher in exchange for an honest review
Publisher: Headline Review
Pages: 437
Rating: 4.5/5
Blurb: 1648. Orphaned heiress Lady Katherine Ferrers is forced into marriage for the sake of family honour... But with Cromwell's army bringing England to its knees, her fortune is the real prize her husband desires. As her marriage becomes a prison and her privileged world crumbles, Katherine meets her match in Rafe - a lover who will lead her into a dangerous new way of life where the threat of death lurks at every turn...
Enter Kate Ferrers, highwaywoman, the Wicked Lady of legend - brought gloriously to life in this tale of infatuation, betrayal and survival.


From the very first chapter this book held my attention. There was not a single dull moment throughout the book and the short chapters made for a fast read, which is unusual for a historical novel.

The main character, Katherine, was engaging and compelling but not exactly likable. I rooted for her, I wanted her to succeed but she could also be selfish and uncaring. At one point in the book her husband questioned if she even had a heart. As a result of her self-focused nature and the first person perspective of the book we don't get a very close look at the other characters. Most characters exist only in their relation to Kate. Her husband, a man who fights for the King and is even imprisoned for this, is portrayed as a coward or weak - because that's her original opinion of him and she rarely, if ever, changes her opinion of anyone. Rachel is her friend and maid and Kate gets unreasonably annoyed if Rachel ever deviates from these roles.

However there was a lot of character growth. The Kate of the beginning of the book - entitled and selfish - becomes the Kate of the end of the book - a more mature and thoughtful woman. She never quite loses that selfishness but I almost enjoyed her character more for that - she wasn't flawless, she was human. I wish we had been able to see more of the other characters, particularly Martha, but the view we got was true to Kate's character.

The historical details of this novel were a definite highlight for me. I knew a fair amount about the Civil War but I knew next to nothing about the period after the Civil War but before the Restoration. I knew some of the more ridiculous laws but I hadn't appreciated what life was like for aristocrats during that period. Kate was loyal to the King but, as could be expected from her, this was more for her own purposes - she wanted her home back.

There was a lot of discussion around morality. Due to an experience in the first chapter of the book, Kate spends the rest of the book believing herself to be tainted or wicked. This influences a lot of her decisions and the way in which she interacts with other characters - its what gets her involved with Richard Willis for example. She also has a tendency to judge others harshly, I have already mentioned her judgment of her husband. She later takes a rather hypocritical view of the actions of her friend Rachel.

There is also an interesting emphasis on class. Kate is a Lady and this affects all of her relationships. Martha, a Puritan with a merchant father who befriends Kate is, for much of the book, looked down on by Kate. At one point Kate says that it is kind of her to condescend to speak to Martha - a moment that made me want to shake her! But this, again, is very true to the times and to Kate's character and so it is interesting to watch their relationship unfold. She also, despite calling Rachel a friend, never forgets Rachels status as her maid.

Overall this was a really quick, engaging read with an interesting and very real feeling main character. I also loved the end of the book where the real biography of Kate Ferrers was printed - she seems to have been as compelling in history as she is in this novel. I definitely want to read more from this author.