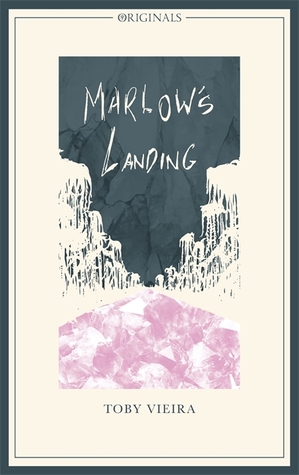 Title: Marlow's Landing
Author: Toby Vieira
Source: Received from publisher for an honest review
Publisher: John Murray Original
Pages: 304
Rating: 3/5
Blurb: A thrilling novel of diamonds, deceit and a trip up-river.
Goldhaven is after the biggest pink stone in the world. Zog Shikzahl is after Goldhaven. And Boss Macquarie is after his cut. But what on earth is an accountant from Hull after, heading upriver into the biggest white patch on the map?


I didn't know a lot about this book before I started. The blurb is very vague, and there was only one review up on goodreads. So I went in with an open mind and came away - pleased and slightly confused?

This is not a book you can dip in and out of. It demands you're full attention. There is no dialogue - or rather there are no quotation marks and the dialogue is mixed in amongst the general text. And I'll admit this bothered me at first, but once I had got my head around it (and sorted out who was saying what when) this wasn't as disorienting and definitely added something to the overall feel of the book - which was a bit like stream of consciousness from the main character. It reminded me almost of reading someones diary. There is also quite a bit of French dialogue thrown in there - which is where it lost me a little, I did German in school, not French so my understanding of those parts was pretty much non-existent.

The main character, whose name I have either forgotten or was never mentioned, is at times a bad head to be inside. Goldhaven would have been more calm and collected. Our main character on the other hand, is wholly unsuited to the business of diamond smuggling and, once he has contracted malaria, he becomes completely unreliable. His dream sequences and hallucinations are mixed in with the general plot with no clear division so it was sometimes a job to work out what was or was not happening - although I am pretty sure the scene with giant talking birds was a dream. This means there is a lot of re-reading sections.

I really liked the ending which was left as vague as the blurb and offered up some interesting choices for the reader. I usually prefer closed endings but in this case - when it comes to the enigmatic Goldhaven - I preferred the more mysterious ending.  Goldhaven was the books most intriguing character and I was really hoping to see more of him. Any of his scenes are written in third person - which keeps up the whole mysterious aspect. So you never really know what he is thinking or what he is up to. He is, arguably, the villain of the novel, in the way he treats other characters - specifically the main character. But I found him infinitely more interesting and compelling.

Overall, I would say that, although this book left me unsure of how I felt I am very glad I read it. It was very different from anything I expected to read and was laid out in a way I would normally say I hated. But I did connect with the characters, I smiled, I empathised, I was desperate to find some sort of happy ending for the main character and to know more about Goldhaven. If you have the time, the intense concentration and the French dictionary to hand then I recommend this, but I am sure this won't appeal to everyone.

You can also find us on Goodreads (Ann and Clare) to keep up with what we are reading
Posted by Dual Reads at 05:00