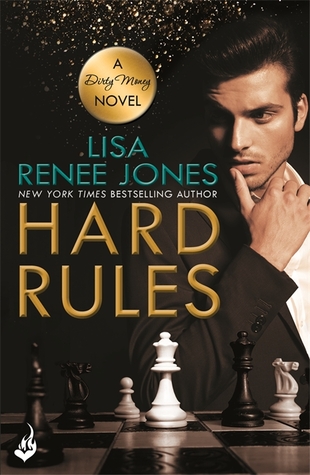 Title: Hard Rules
Author: Lisa Renee Jones
Series: Dirty Money #1
Source: Received from publisher for honest review
Publisher: Headline Eternal
Pages: 304
Rating: 3/5
Blurb: The only man within the Brandon empire with a moral compass, Shane Brandon is ready to take his family's business dealings legitimate. His reckless and ruthless brother, Derek wants to keep Brandon Enterprises cemented in lies, deceit and corruption. But the harder Shane fights to pull the company back into the light, the darker he has to become. Then he meets Emily Stevens, a woman who not only stirs a voracious sexual need in him, but becomes the only thing anchoring him between good and evil.


Emily is consumed by Shane, pushed sexually in ways she never dreamed of, falling deeper into the all-encompassing passion that is this man. She trusts him. He trusts her, but therein lies the danger. Emily has a secret, the very thing that brought her to him in the first place, and that secret that could that destroy them both.

Hard Rules is the first in a promising new series from Lisa Renee Jones. Although this wasn't as exciting a novel as I had been expecting, the last few chapters showed that the series as a whole is going to be full of excitement and betrayal.

The characters are very intriguing. Emily has a past that is never revealed in this book and I am having a lot of fun trying to guess what she was involved in previously. Despite her potentially dubious past and some suspicious behaviour - I was certain that we, the readers could trust her. Shane was a lot more upfront with his past, he came across as a very truthful and moral person and I will be interested to see how he handles Emily's lies in future books. The side characters were never as fully fleshed out as I would have liked. Jessica and Seth are the trustworthy sidekicks, Shane's parents are devious and manipulative and Derek, Shane's brother, seems to be straight up evil. I am hoping that each of these characters come into their own a bit more in future books.

Unfortunately, the plot - which promised to be an intriguing look at corruption in Shane's family business - did get buried under a lot of  romance. The romance itself was mostly believable although it did develop incredibly quickly. Both Shane and Emily also had a frustrating habit of pushing each other away to protect the other person. It always makes me frustrated when characters don't just talk about what's going on. So much strife could be saved. But, of course, that would make for a much shorter series and who wants that?

This was a very well written book with some great characters and the promise of a very exciting plot in books to come. Book 2 Damage Control is set to be released in February of next year so I don't have to wait too long to pick up from where this book's cliffhanger left off. But I know I will be keen to see what happens next with Shane's family, and perhaps even more - what happened in Emily's past. If you're a romance fan then this is definitely a series you'll want to get into.

You can also find us on Goodreads (Ann and Clare) to keep up with what we are reading
Posted by Dual Reads at 03:12