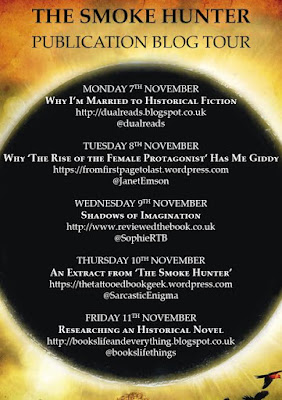 Why I’m Married to Historical Fiction

Or “Why can you just write something that takes place after people had hairdryers?”

I’ll admit it: I’m biased. Hand me some piece of contemporary fiction, however widely lauded, and I will more than likely toss it aside in favor of a Regency bodice-ripper at the first opportunity.

Why? Well, for one thing, bodice-rippers are fantastic. But more generally, I’m a nut for stories set in the past. Whether it’s Cleopatra’s Egypt or Edwardian London, offer me a chance to time-travel through fiction and I will almost certainly climb right in and start exclaiming how much bigger it is on the inside.

It should be no surprise, then, that as a novelist, I choose to write stories set in the past. I might otherwise stir up genres from romance to thriller like a kid with finger paints, but I’m always going to be doing so in an era nobody living actually remembers anymore.

As a writer, I’ve had to think more critically about what makes historical settings so compelling to me, besides simply the opportunities they give you to explore recognizable-yet- exotic sources of conflict, like pitting one’s skills as an archaeologist against an army of ruthless Nazis.

My favorite era to play in as a storyteller is the late Victorian-early Edwardian period. There are so many aspects of life during this time that make for solid gold in terms of developing a high-stakes plot chock full of juicy conflict:


Those writing in Ancient Rome might get palpitations over the chance to indulge in gluttony and political intrigue while lepers waste away in the streets. Buffs of 18 th century Scotland get to play with gruesomely messy forms of warfare, primitive medicine, and – of course – kilts. But when one gets past specific draws like these, there’s a common appeal that I would argue all historical settings inherently possess: namely, the manner in which they effect, as Coleridge puts it, the “willing suspension of disbelief”.

When opposed to contemporary fiction, history is far enough away to grant you a bit more wiggle room when it comes to what qualifies as ‘possible’. Yet unlike alternate-world fantasy, it’s still familiar, tied into things that we know as true. Historical settings, by their nature, straddle this line, which also happens to be the line between a reader’s natural skepticism and their consent to join you on a wild made-up ride.

And whether your fiction revolves around a heart-wrenching family drama or, like mine, lost cities, dangerous artifacts, and epic journeys through exotic locations, it will be asking the reader to accept an invented world populated with invented people. If playing in history’s sandbox makes that a little bit easier to accomplish, that sounds like all the more reason to indulge.

Jacquelyn Benson’s debut novel, The Smoke Hunter, is the tale of archivist Eleanora Mallory’s wild journey through 19th century Central America as she races to uncover the secret of a mysterious map that may be the key to unraveling an ancient mystery. Find out more at JacquelynBenson.com.

Don't forget to check out the other stops on the blog tour and keep an eye out for my review of The Smoke Hunter which will be coming later this month!

You can also find us on Goodreads (Ann and Clare) to keep up with what we are reading.
Posted by Dual Reads at 06:00