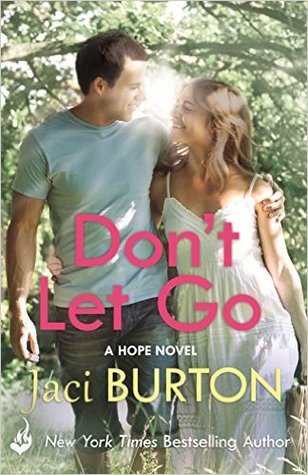 Title: Don't Let Go
Author: Jaci Burton
Series: Hope #6
Source: Received from publisher for an honest review
Publisher: Headline Eternal
Pages: 285
Rating: 3/5
Blurb: Brady Conners is hardly the settling type, but when tragedy strikes in his family, he has no choice but to return home to Hope, Oklahoma. Setting up shop to work on custom motorcycles and pass the time, Brady has no intention of letting anyone get close—until he meets Megan.


Pastry shop owner Megan Lee is drawn to quiet, brooding Brady. Their connection is undeniable, and it quickly develops from physical attraction into something much stronger. But with Brady putting up barriers, Megan is afraid to truly open her heart—unless she can convince him to let go of the past…


Don't Let Go is the sixth book in the Hope series by Jaci Burton. I haven't read the first five books in the series and, whilst it is possible to read this as a stand-alone, I'll admit there were times I felt left out regarding some characters' histories or relationships to each other. So I would probably recommend reading the series in order.

There was a huge cast of characters to wrap my head around and it definitely got confusing at times (I have a tendency to mix people up if their names sound vaguely similar). But the main characters were well fleshed out. I did feel like Brady was more in-depth than Megan. Possibly just because he had more to struggle with. But I would say that I would have liked more on Megan - whilst we get to hear Brady's full back story we get one little snippet of Megan's which was a shame. The other characters, who I assume are the main characters of the previous books in the series, were all interesting but clearly written for people who have already read the previous books. I was constantly forgetting who was with whom and who was or was not married/pregnant.

The plot was interesting, although often a bit all over the place. There were two births, a wedding and a house-building (which in my head was a bit like the barn-raising scene in Seven Brides for Seven Brothers) so there was a lot of time spent on the happy endings of other characters. We also see Brady's struggle with moving on after the death of his brother. He definitely didn't handle it in a healthy way and for a lot of the book I just wanted to push him towards the nearest therapist and tell him to come back and try romance again when he has moved along the road to recovery.

Romance-wise, this wasn't my favourite. Megan and Brady clearly had chemistry but I wasn't convinced about this deep connection they were supposed to have. I didn't feel like Brady was in the right place to start a relationship (something he even said repeatedly) and as a result I found the ending a bit off because it just felt like he'd developed a dependency on Megan. Maybe I am just over-thinking it all but I would have recommended him working on himself before he even attempted anything with Megan.

I also found the writing a bit awkward at times and often very repetitive. "This is true" was said so many times it would make a good drinking game. But it is a fun, relatively light read and I did develop some kind of an emotional connection to the characters. There is a scene between Brady and his parents at the end that nearly made me cry. If you are a romance fan of the overly cheesy variety - there is a good chance this will appeal to you. There is an abundance of very, very cheesy flirtation and sentences that I think were meant to be sexy but honestly made me laugh. And of course the obligatory sweet ending.

This wasn't the best romance book I've ever read but it definitely wasn't the worst either. I read it in one sitting and I don't regret the time I spent reading it. If you are already a fan of Jaci Burton, or the Hope series, then all of the extra happy endings scattered throughout the book will thrill you, or if you just fancy a quick romance read, this could be great for you.

You can also find us on Goodreads (Ann and Clare) to keep up with what we are reading
Posted by Dual Reads at 18:50