Cover Reveal and Excerpt: Strange the Dreamer by Laini Taylor 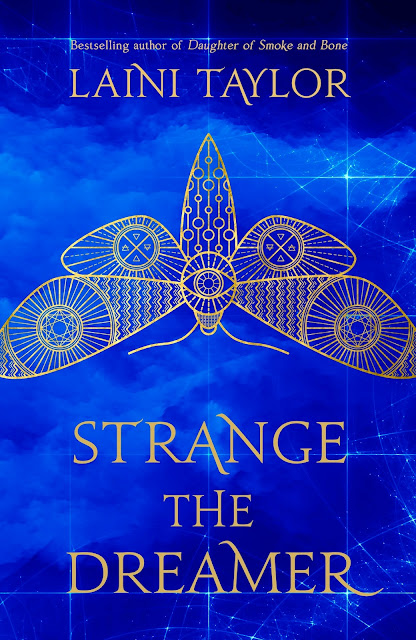 Prologue Excerpt:
On the second sabbat of Twelfthmoon, in the city of Weep, a girl fell from the sky.
Her skin was blue, her blood was red.

She broke over an iron gate, crimping it on impact, and there she hung, impossibly arched, graceful as a temple dancer swooning on a lover’s arm. One slick finial anchored her in place. Its point, protruding from her sternum, glittered like a brooch. She fluttered briefly as her ghost shook loose, and then her hands relaxed, shedding fistfuls of freshly picked torch ginger buds.

Later, they would say these had been hummingbird hearts and not blossoms at all.
They would say she hadn’t shed blood but wept it. That she was lewd, tonguing her teeth at them, upside down and dying, that she vomited a serpent that turned to smoke when it hit the ground. They would say a flock of moths had come, frantic, and tried to lift her away.
That was true. Only that.

They hadn’t a prayer, though. The moths were no bigger than the startled mouths of children, and even dozens together could only pluck at the strands of her darkening hair until their wings sagged, sodden with her blood. They were purled away with the blossoms as a grit-choked gust came blasting down the street. The earth heaved underfoot. The sky spun on its axis. A queer brilliance lanced through billowing smoke, and the people of Weep had to squint against it. Blowing grit and hot light and the stink of saltpeter. There had been an explosion. They might have died, all and easily, but only this girl had, shaken from some pocket of the sky.

Her feet were bare, her mouth stained damson. Her pockets were all full of plums. She was young and lovely and surprised and dead.

She was also blue.

Blue as opals, pale blue. Blue as cornflowers, or dragonfly wings, or a spring—not summer—sky.

Someone screamed. The scream drew others. The others screamed, too, not because a girl was dead, but because the girl was blue, and this meant something in the city of Weep. Even after the sky stopped reeling, and the earth settled, and the last fume spluttered from the blast site and dispersed, the screams went on, feeding themselves from voice to voice, a virus of the air.

The blue girl’s ghost gathered itself and perched, bereft, upon the spearpoint-tip of the projecting finial, just an inch above her own still chest. Gasping in shock, she tilted back her invisible head and gazed, mournfully, up.

The screams went on and on.

And across the city, atop a monolithic wedge of seamless, mirror-smooth metal, a statue stirred, as though awakened by the tumult, and slowly lifted its great horned head. 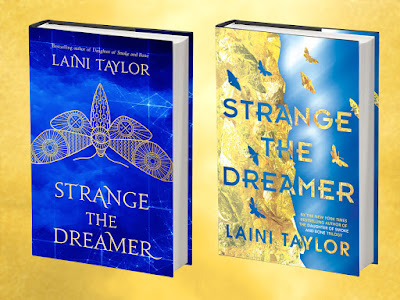 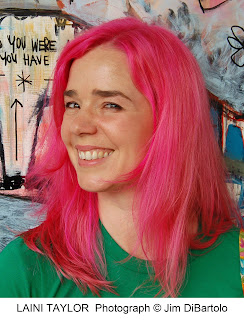 I am a huge fan of Laini Taylor's Daughter of Smoke and Bone series so when I saw the email asking if I would be interested in taking part in the cover reveal - I obviously jumped at the chance. I adore both of these covers, it's almost impossible to choose between them and I am worried when the time comes I will wind up buying both (my shelves need to be beautiful!) but there is of course no doubt in my mind that I will be reading this as soon as possible! The prologue has me hooked and I know I can trust Laini Taylor to deliver an amazing book.

Let me know what you think of the covers and the excerpt!

You can also find us on Goodreads (Ann and Clare) to keep up with what we are reading
Posted by Dual Reads at 15:53