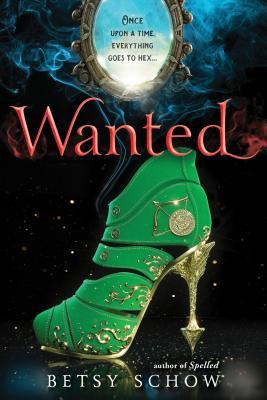 Title: Wanted
Author: Betsy Schow
Format: ARC
Source: Received for an honest review
Pages: 298
Rating: 2/5
Blurb: Rexi Hood is proud to be an outlaw. After all, she's the daughter of the infamous Robin Hood. But sidekick? Accomplice? Sorry, that wasn't in her story description. Yeah, she and Princess Dorthea of Emerald have been inseparable since they teamed up to fight the wickedest witch. But if Rexi doesn't figure out how to break the curse that binds them, forget being overshadowed by the spirited princess, Rexi's going to become a Forgotten, wiped from the pages of Story and reduced to a puddle of ink.


Not happening. No way in Spell.
Rexi's plan? Steal the sword Excalibur and use its magic to write her own tale. But Gwenevere has opened a new Academy of Villains in Camelot and danger lurks behind every plot twist. And you know how it goes in Story: keep your friends close and your enemies closer...

I so wanted to love this book. It is a companion to Spelled which I read last year and really enjoyed. It had a snarky humour to it and plenty of puns (which I love) and did a really good job of being a fairy tale parody and homage. Unfortunately Wanted fell a little short of that.

The snarky humour is still there but it felt very forced at times. I still loved the Fairy Tale Guidelines snippets at the beginning of each chapter, but the actual story itself felt disjointed and I never truly connected with it. The whole ending was fairly frustrating as well. Obviously can't say why without spoilers but it was not an ending I enjoyed.

Rexi is the sort of character I usually love - she is tough and independent and sarcastic. Dorthea (the protagonist of Spelled) is kind of the opposite - and is actually the kind of character I generally don't like. And yet I connected with her a lot better. Rexi was a character I enjoyed reading about in Spelled but being inside her head for the duration of Wanted was not as much fun. She made the world seem darker and the fact that she kept dying and coming back (with less memories) meant that I was never quite sure what she did or did not know or how much of herself she really was at any one time.

The introduction of Camelot and the related characters was fairly interesting. But it turns out I have very strong feelings about the whole Camelot story - feelings I didn't even know about until now and could apparently rant about for ages. There were elements of the reimagining that I did like - I always love a good villain redemption so the Mordred tale was intriguing. But there were, equally, plenty of things that made me roll my eyes a bit. Although I feel like this part is just me imposing my own apparently very adamant feelings about how the Camelot story went down.

I just honestly am very disappointed in Wanted. It should have been a fun and funny read and instead I found it was a bit of a drag to get through. I don't know yet whether I will be reading Banished, if it's from Rexi's POV I think definitely not but I am still intrigued by the world enough that I want to have a better conclusion than this story gave me.