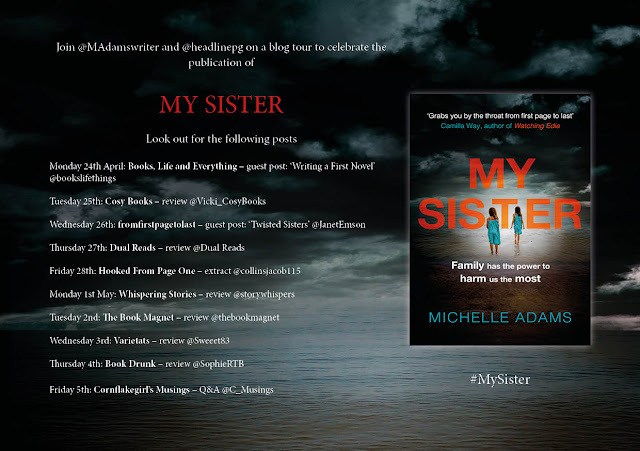 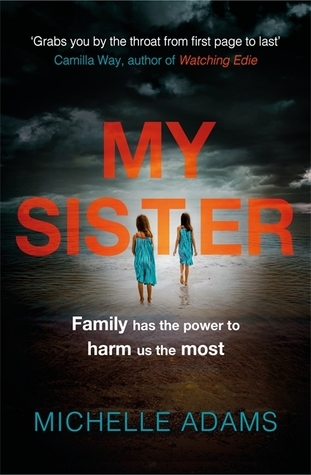 Title: My Sister
Author: Michelle Adams
Pages: 375
Blurb: My Sister tells the story of Irini, who was given away by her parents at the age of three, whilst her volatile, destructive sister was kept within the family. Twenty years later Irini receives a phone call from her estranged sister to say that their mother has died, compelling her to return for the first time to the family home, and to uncover the shocking truth that has defined both their lives.

I am drawn to books about sister relationships always. And I am so glad I had the chance to read this. At first I was worried I wasn't liking the book. I felt uncomfortable and off balance - but then I realised that's what made it so good.

Elle and Irini aren't really likable. Elle is terrifying. Charismatic and difficult with a long, long victim list. Irini on the other hand was unlikable only in her weakness. In her youth when she went along with everything Elle said and did - no matter the cost to other people. I found it hard in places to read about the hurt she caused others, her and Elle, and yet I never doubted Irini. I wanted her to get a good ending, to have the resolution she needed.

What really struck me with My Sister is how real it felt. So often, in thrillers, I am along for the ride and enjoying it - but always conscious of how unlikely it all is! Here, there was none of that. Elle and Irini and all the other characters felt like real people to me, fleshed out and realistic. Their actions were human even when they were bad and I really felt for Irini towards the end as she lost control of what was happening. I didn't always agree with her decisions certainly, but I always believed in them.

The twists were ones I never saw coming which is always great! I am still processing the last few chapters and I have a few unanswered questions regarding the future. But this isn't frustrating to me so much as ensuring that I will keep thinking about this book for a long time to come. There were moments towards the end that I felt were a little too rushed, the pace changed abruptly and so many things were revealed in such a short amount of time that ultimately we didn't get to spend so long unwrapping them as I would have liked.

Overall though this was an intriguing and exciting read with very human (though not always likable) characters. If you find family dynamics as fascinating as I do, especially in thrillers, then I really do recommend this and I am very interested to see what Michelle Adams will write next!