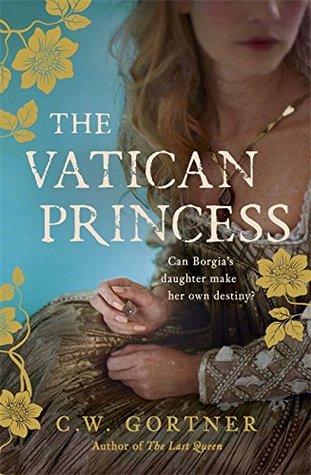 Title: The Vatican Princess
Author:  C. W. Gortner
Format: Paperback  received from Hodder & Stoughton
Pages: 400
Rating: 5/5
Blurb: Infamy is no accident. It is a poison in our blood. It is the price of being a Borgia. Glamorous and predatory, the Borgias became Italy's most ruthless and powerful family, electrifying and terrorizing their 15th-century Renaissance world. To this day, Lucrezia Borgia, the Pope's beautiful daughter, is known as one of history's most notorious villainesses, accused of incest and luring men to doom with her arsenal of poison. Was she the heartless seductress of legend? Or was she an unsuspecting pawn in a familial web, forced to choose between loyalty and her own survival? From her pampered childhood in the palaces of Rome to her ill-fated, scandalous marriages and complex relationship with her adored father and her brothers, this is the dramatic, untold story of a papal princess whose courage led her to overcome the fate imposed on her by her Borgia blood.


"Infamy is no accident. It is a poison in our blood. It is the price of being a Borgia."

This is not the Lucrezia Borgia you think you know. She is not the femme fatale of legend. Instead she is someone who felt real and even admirable to me. Her character is the strongest part of a novel that is already incredibly good.

Even as I read this, with the real Italy outside my hotel window, I felt transported and engaged. I was completely absorbed by the description and the characters. It all felt like it was completely true to me in a way that I very rarely experience with historical novels. In actual fact the last time I truly remember it happening was when I read C. W. Gortner's The Last Queen. Each character had so many layers to them and there was such an element of doubt to each character that had me trusting and then distrusting them at turns. And yet Lucrezia had such an honest voice, which I really enjoyed. Much as I genuinely love untrustworthy protagonists, I preferred the safety of her voice amidst the confusion of so many others who were potentially traitors in waiting.

There was a lot of tragedy in this story and my heart broke for poor Lucrezia over and over again. Having been interested in Lucrezia for a while there were some things I knew would happen and yet the book was so well written that it felt like I was hearing it for the first time - and I had the foolish hope that maybe things would turn out differently. There are some parts where C.W. Gortner has been forced to guess at events since there is not really anything concrete in history, but it fit so well into the overall story and the characters motivations that I was completely willing to accept it as fact.  I should mention here that there are one or two fairly distressing scenes, however I found them to feel true to life and necessary to the story.

There is clearly a lot of research that has gone into this book and it shows in the complexity of the story and characters and in the depth to the description. I also really appreciated the afterword which was very interesting from a historical point of view.  Despite the obvious research this book never felt like it was trying to lecture me, or too much like a fact book. Two things I really dislike in historical novels. Instead it simply felt alive.

Overall I was blown away by this book and I could probably go on gushing for a while. It was so much better than I had even expected and it was such an emotional journey of a read. I was thinking about it long after I had finished it. But all you really need to know is that this was a superbly written story driven by incredibly strong characters and if you like historical novels - you need to read this.


You can also find us on Goodreads (Ann and Clare) to keep up with what we are reading
Posted by Dual Reads at 17:05