5 Reasons to Love Why I Loathe Sterling Lane 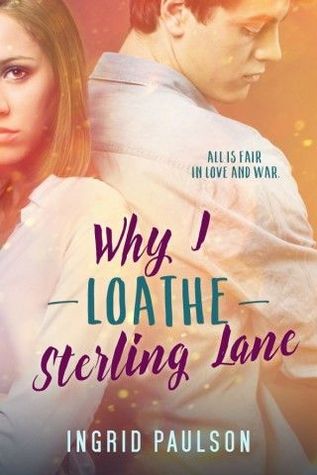 Title: Why I Loathe Sterling Lane
Author: Ingrid Paulson
Format: E-Arc
Source: Received via Netgalley for an honest review
Pages: 287
Rating: 4.5/5
Blurb: Per her 537 rules, Harper Campbell keeps her life tidy—academically and socially. But the moment Sterling Lane transfers into her tiny boarding school, her twin brother gets swept up in Sterling’s pranks and schemes and nearly gets expelled. Harper knows it’s Sterling’s fault, and to protect her brother, she vows to take him down. As she exposes his endless school violations, he keeps striking back, framing her for his own infractions. Worst of all, he’s charmed the administration into thinking he’s harmless, and only Harper sees him for the troublemaker he absolutely is.
As she breaks rule after precious rule in her battle of wits against Sterling and tension between them hits a boiling point, she’s horrified to discover that perhaps the two of them aren’t so different. And maybe she doesn't entirely hate him after all. Teaming up with Sterling to save her brother might be the only way to keep from breaking the most important rule—protecting Cole.

Our main character Harper loves rules and lists. And hey, so do I! So I thought I'd tell you the 5 reasons I enjoyed this book. A lot.

1) You can identify with the main character
Like I said. Love lists. And whilst I haven't gone so far as to write 537 rules for life, I do have a notebook full of random lists from everything including wishlists and TBRs to things I need to do, to god, everything. I'm obsessed with lists. So it was so satisfying to see her a) be someone I could identify with and then b) also be able to change and grow.

2) Character Growth
Harper, as I mentioned, grows from very stiff rule keeper (which actually I wasn't so familiar with) and list maker to prankster and rule breaker and the growth was totally natural and felt realistic to me. Sterling, on the other hand, was more of a character reveal. I feel like he was always who he said he was, more or less and we just grew to love him more as more of his character was revealed. BUT also they both stay true to who they are. And I loved the emphasis on that.

3) If you're a Ravenclaw...
Then you will love Harper. She was big on hard work and intelligence. I'm not a Ravenclaw but that's fine cause (as a Slytherin) I had Sterling's morally dubious ways to fall in love with instead.

4) Adorable Hate-to-Love romance
My favourite kind of romance!!! I really, really enjoyed the progression from I-kinda-hate-you to well, you know the opposite. There were many toe-curlingly cute romantic moments and a few utterly swoonworthy ones and if you love hate-to-love as much as I do then read this.

5) Sibling Relationship
Possibly my favourite part of the whole book actually was the sibling relationship. I am the eldest of four and I would do anything for my siblings - but that doesn't mean we don't bicker or fall out. So I adored reading about Harper and Cole because they felt so real to me. They would (and often did) drop everything to support each other - Harper is even late to class *gasp - but they also had arguements and disagreements and silly sibling rivalry. And god I just love great sibling relationships in books.

So there are my 5 totally important reasons for you to read Why I Loathe Sterling Lane. Are you convinced? I've somehow managed to convince myself and now want to re-read it. If you're looking for your next summer-contemporary read then this could very well be it.

Link up to Monday Highlights!