Clare Reviews: The Trouble With Mistletoe by Jill Shalvis 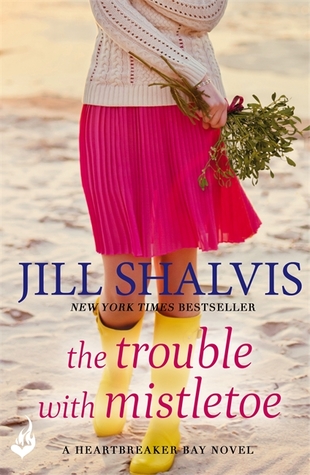 Title: The Trouble with Mistletoe
Author: Jill Shalvis
Series: Heartbreaker Bay #2
Source: Received from publisher for an honest review
Pages: 384
Rating: 4.5/5
Blurb: If she has her way... Willa Davis is wrangling puppies when Keane Winters stalks into her pet shop with frustration in his chocolate-brown eyes and a pink bedazzled cat carrier in his hand. He needs a kitty sitter, stat. But the last thing Willa needs is to rescue a guy who doesn't even remember her...
He'll get nothing but coal in his stocking. Saddled with his great-aunt's Feline from Hell, Keane is desperate to leave her in someone else's capable hands. But in spite of the fact that he's sure he's never seen the drop-dead-gorgeous pet shop owner before, she seems to be mad at him...Unless he tempers 'naughty' with a special kind of nice... Willa can't deny that Keane's changed since high school: he's less arrogant, for one thing - but he doesn't even remember her. How can she trust him not to break her heart again? It's time to throw a coin in the fountain, make a Christmas wish - and let the mistletoe do its work...

This was one my most anticipated books for the end of 2016 after I read and adored Sweet Little Lies. I'll admit I was desperate for an Elle/Archer book and initially very disappointed that this wasn't it but Willa and Keane more than made up for it with their oh so sweet relationship and excellent chemistry.

Willa was a very compelling character from the start. She had a lot of issues to work through and I really liked that she was willing and able to recognise that and to work through them for her own sake. Not at any point did it feel like Keane was magically fixing her - or for that matter that she was fixing him. They had a very believable romance and, perhaps more importantly, friendship. Keane was the character I was most worried about liking however by the end of the story I think I honestly liked him even more than I did Willa. His character grew a lot over the course of the book and I really admired him for that.

Plot wise there isn't a lot of action - in fact it's pretty quiet. There is no great antagonist and the only obstacle in their relationship is themselves. Willa has a propensity for choosing bad guys and is nervous about giving her heart as a result. Whilst Keane believes himself to be emotionless - a belief that seems to be masking the much more heartbreaking fact that he thinks himself unlovable. Despite the lack of drama this was a very quick and absorbing read. I flew through it in one sitting, constantly telling myself "one more chapter" which as we all know is a lie.

A huge part of this is Jill Shalvis' superb writing, which draws you into the story and then effortlessly leads you right through to the conclusion. The time spent reading this felt very quick and the ending came far too soon. I loved the resolution which I thought was right for these characters and it left me with a warm, happy feeling.

The highlight of this series so far for me is the genuine friendships of the group and that's something I know will continue in each book going forward. They are so supportive and loving and it's really great in a romance novel to have such a focus on relationships outside the main romance. It added a lot of depth to the story - and also lets us get to know the characters so we can get more excited for each book in the series.

The next book "Accidentally on Purpose" is the Elle/Archer book I've been so looking forward to and having read the teaser at this end of this book I am certain it will be amazing. This book is set around Christmas and there is plenty of festive cheer so if you're looking for a Christmas read or simply a great romance then I highly recommend this.
Posted by Dual Reads at 02:10