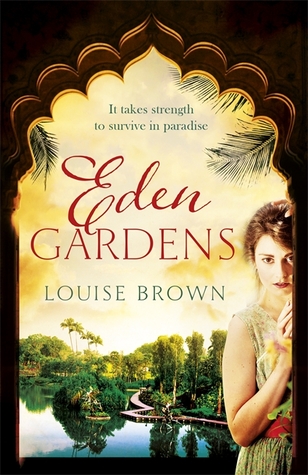 
Whiskey-fuelled and poverty-stricken, Mam entertains officers in the night - a disgrace to British India. All hopes are on beautiful Maisy to restore their good fortune.
But Maisy's more at home in the city's forbidden alleyways, eating bazaar food and speaking Bengali with Pushpa, than dancing in glittering ballrooms with potential husbands.
Then one day Maisy's tutor falls ill. His son stands in. Poetic, handsome and ambitious for an independent India, Sunil Banerjee promises Maisy the world.
So begins a love affair that will cast her future, for better and for worse. Just as the Second World War strikes and the empire begins to crumble...

This is a novel recommended for those who enjoy the novels of Santa Montefiore and I would agree, to an extent. Like Montefiore's novels the era and setting are wonderfully evoked and the writing is compelling. However, this is a far darker and less hopeful story than I had expected.

The book is written in alternating chapters between Maisy and her ayah Pushpa. Of the two I found I preferred Pushpa's narrative as she was a more sympathetic character. Maisy struck me as a bit boring, she looked down on her Mother for choosing prostitution and dismissed any claims that her own choices resembled her mothers. She could be very self indulgent at times and, much as she would hate to admit it, she became more and more like her mother as the novel progressed. Pushpa on the other hand came across as a strong and caring woman who, nevertheless, accepted the harsh realities of the life around her.

The real strength of this novel lies in the historical detail and the writing. This book doesn't flinch from showing the realities of British colonialism and I really enjoyed the perspectives of the characters on this. Maisy is technically British but, having been born in Calcutta, she often finds her sympathies lie elsewhere and, as Pushpa later reflects, finds that she doesn't really belong in either world. I also really liked the way in which the beautiful writing and descriptions contrasted with the coarseness and harshness of the characters lives.

The romance was intriguingly written. We get both Maisy's lovestruck view of Sunil and Pushpa (and Maisy's mothers) more cynical view and it is left to the reader to decide which more closely resembles the truth. Sunil was only rarely in the story and yet his actions and decisions caused many of the problems in Maisy's life. To me, perhaps because we never see his perspective, I found myself agreeing with Pushpa's perspective more than Maisy's and often disagreed with the choices Maisy made.

As intriguing as the relationship was, I never felt any depth or connection from it since it progressed fast and then Sunil was mostly absent. And so the effects of the relationship and the consequences were of more importance than the relationship itself which I had no real emotions about. I would have liked to be more connected or invested in Sunil and his relationship with Maisy but I also appreciated the ambiguous stance of the author.

I also would have liked the structure of the book to be more linear. The first quarter or so of the book is very jumpy, moving forwards and backwards in the characters lives which could get confusing at times - Maisy's father for example was dead in one scene and then a few scenes on she had a conversation with him. The rest of the book, thankfully, moved forwards at a normal pace but I would have liked dated chapters as with a book like this that spans many years, I find it easier to keep track of events and characters and to put them in their historical context when I know when the chapter takes place.

This is not a hopeful book, there were not really any moments of joy and for the most part I found it to be a depressing novel. But it was a well written story and I did get attached to Pushpa, even if the other characters never truly grabbed my attention. I will be interested to read more by Louise Brown.

You can also find us on Goodreads (Ann and Clare) to keep up with what we are reading
Posted by Dual Reads at 02:36