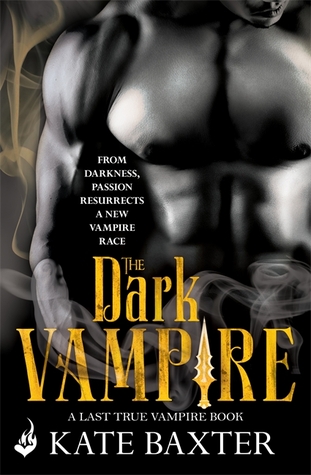 Title: The Dark Vampire
Author: Kate Baxter
Series: Last True Vampire #3
Format: Paperback received from publisher for honest review
Rating: 4/5
Blurb: For centuries, Jenner has been plagued by the shadows of his past. Now, a newly-turned vampire, he stalks the night like a wild predator, unable to satisfy his insatiable desires. Until a beautiful vampire sets his soul on fire...
Bria is pure innocence, hidden her whole life from a merciless enemy determined to hunt her down. When things become perilous, safety comes in the form of a fearsome bodyguard - Jenner.One fateful night, Bria is saved by her vampire protector and a blazing connection is sparked. But surrendering to the powerful call of passion means breaking free from the shackles of their pasts. And with the war against the slayers more savage than ever, they must fight to survive. For the vampire race depends on it.

The Dark Vampire is exactly what I had expected - an exciting, sexy novel with vampires that, for the most part at least, are on the dark side. They are the heroes of the story with the slayers, who play a small part in this novel but - I suspect - a larger one in the series as a whole, on the villaionous side. Which is an odd thing for my Buffy-wired brain to comprehend.

This is the third book in the series and, whilst it works as a stand-alone (which is how I read it) I got the sense that there were some plot elements that would make more sense to me had I read the first two books, plus some characters I would have known better. Besides which the characters who are the main focus of the first two novels were compelling and likable in their own ways and I definitely suspect I will be going back to read them at a later date.

The two main characters of this book - Jenner and Bria - were very well drawn characters. Thy had plenty of depth to them and were definitely very distinct and different from each other. Jenner, like quite a lot of romance heroes, has a dark past (hence the "dark" in the title!) and he is wary of committing the same mistakes he has made before. Bria meanwhile has led a sheltered existence - protected and cosseted by her uncle as there is a witch hunting her for reasons she hasn't been made aware of.

The romance between Jenner and Bria was very skillfully not insta-love. The way they meet and become attached to each other could very easily have become insta-love and would probably have lost me. Instead Kate Baxter managed to write a great progression to their relationship that meant I was on the edge of my seat. I would say there is a lot of miscommunication between the characters and I definitely wanted to lock them in a room together and force them to just please talk to each other! But this, as well, felt very real to their characters.

The threat of the witch never felt fully real to me. She doesn't really make an appearance until near the end of the book and so I didn't fully pay attention to her or feel much suspense from her which I would have liked more of. This book is essentially romance in a well-crafted world - the danger was just a side plot. However, since the romance was so engaging and entertaining to read about that I didn't care as much as I might usually have done.

Overall I was very pleased with this book. I read it in one sitting - completely absorbed - and I am very excited to continue (and backtrack) the series. Jenner and Bria are both great characters (although I'll admit to having slightly more love for Bria) and the side characters are very enjoyable as well.