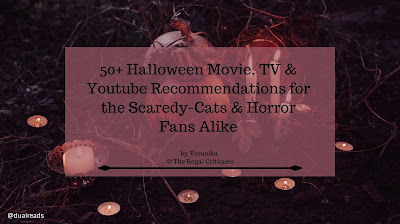 Hello everyone! Veronika here from The Regal Critiques, coming to give you a grand variety of movie, TV show and even YouTube recommendations for Halloween. I attempted to cater to everyone's tastes, so I brought some truly scary, some bloody, some hella dark, but also, some totally non-scary non gory recommendations, as well.  There are too many titles to talk about each of them individually, so I opted for selecting one, my most favorite, from each sub-category, and discussed why exactly I love it so much. BUT, as a simple list would probably make for a rather boring post, I'm going to add TONS OF gifs, basically, a gif from each movie, show or youtube vid. EVERYONE loves a good gif, right!?
So seat belts on, y'all, we're about to embark on one of the most extensive lists of Halloween "watchable" recs EVER. Have fun. 💀 Titles link to IMDb.

for those in need of something scary(-ish)
AMERICAN HORROR STORY

💀 IT IS AN ANTHOLOGY, so even though there are some small connections between the seasons, you can totally watch them out of order, and even leave out the ones you don't care about.
💀 THE ACTING is A+, with actors like Jessica Lange, Kathy Bates, Sarah Paulson, Lily Rabe and Evan Peters playing some of the leading roles.
💀 There's SOMETHING FOR EVERYONE in the series, basically - it has some gore, dark episodes, sort of scary scenes, weirdness, fantastic & complex characters, but also, sometimes humor.
💀 For those who are unfamiliar with the series: S1 - Murder House (ghoooosts), S2 - Asylum, S3 - Coven, S4 - Freak Show, S5 - Hotel (vampires & ghosts), S6 - Roanoke, S7 - Cult
💀 Each season is fine, but the first and second seasons are my favorites, whilst Hotel is probably my least favorite.

💀 DIVERSITY - Nearly all the main characters are diverse, e.g. there are black, bisexual, Asian and gay characters.
💀 MYSTERY - There's basically a whole new centre mystery in every season with time jumps in each episode to keep the truth hidden from the viewers, and IT WORKS SO WELL. Of course, there's a main plot that's been going on from the first season, and these sub-plots fit into that perfectly.
💀 CASES - The characters go to law school, and they get some truly interesting cases and people to defend. Unfortunately, as the plot thickens, they have less and less such cases, but the first season in particular has tons of intriguing ones.
💀 SHIPS - Obviously, romance is NOT the main aspect of this show, but SOME OF THE SHIPS ARE REALLY GOOD.

for those in need of something funny, but gory
SCREAM QUEENS

💀 Unfortunately, the only show I know for this category, but IT IS SO GOOD, especially the first season, the second dragged at some parts.
💀 IT IS FUNNY, really, truly funny at parts and it makes fun of today's pop culture in a non-cringy way.
💀 THE FASHION is reason enough to watch the show, to be honest. The outfits are gorgeous, and the whole show is just freaking aesthetically pleasing to watch, so much so that I actually have a pinterest board dedicated to stuff I think would fit well into the show. Yes, this board represents all the things I can't afford.

for those in need of an animated show
GRAVITY FALLS

💀 A+ GRAPHICS - Honestly, one of the most gorgeous animations I've ever seen. Every little detail is well-done and ah, just check out the first episode and you'll see for yourself what I mean.
💀 FANTASTIC RELATIONSHIPS - Be it the stunning twin-bond between Dipper and Mabel, their friendship with others, or their relationship with their uncle Stan, every single relationship is portrayed SO REALISTICALLY. They argue, they disagree, they do not talk to each other at times, but they obviously love each other so very much.
💀 THERE IS A PIG. 'Nuff said.
💀 MYSTERIOUS. For a show that was aimed at kids originally, Gravity Falls packs some seriously shocking punches. ALSO, each episode basically has a new and super-intriguing... thing (?) revealed about Gravity Falls (as in, the town), like magical creatures or robot-making geniuses. I KNOW, SOUNDS TOO WEIRD, BUT IT'S FANTASTIC.

MOVIES.
slower build-up, but TENSION-filled
GET OUT

💀 THE ACTING took my breath away. Incredibly talented actors, incredible direction and just fantastic work all around.
💀 PLOT TWISTS that were so so so SHOCKING, and shook me to my core.
💀 TENSION, SO MUCH TENSION. Like the category title says - slower build up, but from the get go YOU KNOW that everything will go to shit, and the build-up is so so so well-done.
Other title(s) worth mentioning:

more dark and/or mysterious than scary
IT

💀 HORROR, BUT WORKS FOR NON-HORROR FANS!? Okay, so I'm a huge fan of horror movies, and I looooved IT a lot, but I also know people who despise horror movies, yet, IT worked for them, too! SO, obviously, IT is generally liked by everyone, or so we should pretend for the sake of this post.
💀 THE! ACTING! IS! SO! GOOD! I'm not sure when was the last time I saw a movie with such young cast who a) were INCREDIBLY talented, and b) had great chemistry. I swear to god, I could totally imagine these guys hanging out IRL.
💀 A GREAT ADAPTATION. I haven't read the book (sorry fans!), but the friend I watched the movie with is a HUGE Stephen King fan AND she is really critical, but even she was impressed by IT.
💀 LONG, BUT DOESN'T FEEL LONG. IT is longer than two hours, yet, time seemed to fly by, because the plot was fast-paced and intriguing from the first scene to the last.

(this is an anthology about the darkness in everyday people who get pushed to the edge, and it is a freaking masterpiece)

actually scared the hell out of me
THE CONJURING

EVERYONE KNOWS THIS MOVIE, I THINK. But just in case:
💀 EPIC "GHOST-HUNTER" COUPLE who are actually based on a real-life couple, so that is fascination.
💀 On that note, both The Conjuring 1 & 2 are BASED ON REAL-LIFE EVENTS. I call bullshit on that, but, I guess, this depends on what you believe in lol.
💀 FANTASTIC ACTING. I mean, Vera Farmiga is a QUEEN, I love her, okay.
💀 GREAT STORY-LINE. Actually has a plot, and a great one at that, y'all, doesn't just rely on the scares and shit.

(okay, to be honest, I think this wasn't very impressive?? but good enough for a quick horror movie)

not necessarily scary, but quite bloody
I don't want to highlight either of these, because they are SO DIFFERENT from each other - Goodnight Mommy is truly dark and twisted and plays onto a lot of fears people have, whilst The Hateful Eight is like a dark comedy. Both are great - though, I did like the latter more - and worth watching. HOWEVER, do NOT go and read a lot about GM, because MANY reviews spoil the twist, which is so not cool.

💀 I'll NEVER stop shouting about this movie, because it does not receive enough praise!
💀 It is PERFECT for kids who like creepy things, but, for obvious reasons, can't watch horror yet.
💀 AND for adults who like a great, interesting, UNIQUE movie that has good animation, characters AND IS FUNNY.

💀 DISNEY'S FIRST AWESOME TITLE IN YEARS!!
💀 MUSICAL! I mean, that's a plus for me, but if you dislike music-numbers in movies than probably not cool for you. BUT!! The songs are actually catchy, and closer to being "radio-friendly" than any other Disney songs, to be honest.
💀 KENNY ORTEGA OF HIGH SCHOOL MUSICAL DIRECTED THE MOVIES.
💀 INTERESTING CHARACTERS. The main characters are literally the descendants of 4 great villains - Maleficent, the Evil Queen, Jafar and Cruella de Vil - living imprisoned on an island with all the other villains and their kids.
💀 Honestly, the production value is, obviously, lower than that of other movies from this list, but The Descendants are SO WORTH WATCHING!!

Buzzfeed Blue has a series called Buzzfeed Unsolved that has two different types of videos - supernatural and true crime. I highly prefer true crime, but both are really-fascinating to watch, to be honest. Also Shane and Ryan joke around a lot, so the atmosphere never gets too dark.
Supernatural
S1 | S2
True Crime
S1 | S2

Shane Dawnson has a huge variety of creepy videos on this playlist. These include unsolved cases, supernatural stories, deaths and conspiracy theories. Also, he has another type of "scary" videos where he goes on adventures with his friends, Drew and Garret, to haunted places and the likes. See those here. Now, I'm not going to lie - the closer you get to the current day, the more lukewarm the content gets, it definitely seems like he used up the best of his ideas. BUT I'd still recommend checking out his vids, because there are some truly dark and creepy vids in there. Just scroll around the playlist and click on whatever you're interested in.

QUESTION TIME!
Have you ever watched any of the listed shows/movies/youtubers? What did you think?? What's your absolute favorite thing to watch on Halloween? Also, could you give me & everyone else some more recs in ANY of the categories listed above?? WE'D LOVE TO HEAR YOUR VOICE.
Posted by Dual Reads at 01:13