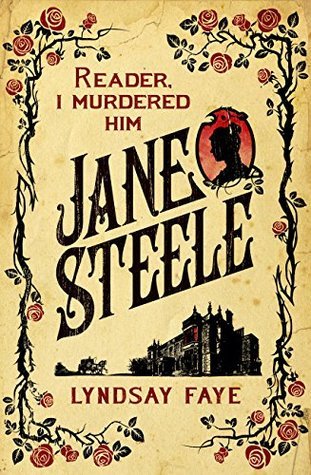 Title: Jane Steele
Author: Lyndsay Faye
Format: Paperback Received from the publisher for review
Pages: 414
Rating: 5/5
Blurb: Like the heroine of the novel she adores, Jane Steele suffers cruelly at the hands of her aunt and schoolmaster. And like Jane Eyre, they call her wicked - but in her case she fears the accusation is true. When she flees, she leaves behind the corpses of her tormentors.
A fugitive navigating London's underbelly, Jane rights wrongs while avoiding the noose. Until an advertisement to be a governess catches her eye. She takes the position and soon falls in love with Mr Thornfield, the master of the mysterious Highgate House. But what happens if he discovers her murderous past?


“Though I no longer presumed to have a conscience, I have never once lacked feelings.”

To say I was excited for this book is a huge understatement. Jane Eyre is easily one of my favourite books so this instantly appealed to me. This is not a retelling but rather a story about Jane Steele who has a few things in common with Jane Eyre - an aunt who despises her, a horrible boarding school, a job as a governess - but handles so much of this so very, very differently.

Jane Steele reads and loves Jane Eyre, which comes up many times throughout the book. She seems to have an admiration for the character of Jane Eyre but she has very little in common with her  personality-wise. Much as I love Jane Eyre I can't deny that I longed for her to have just a bit more back-bone. To take just a tiny bit of revenge! And that's what this book finally gave me. Anyone who thought that certain characters from Jane Eyre really deserved the worst - you will love this book.

And even if you've never read Jane Eyre - there is so much to adore about this book. The writing style is wonderful, simultaneously reminiscent of Bronte and evocative of the slightly more daring life that Jane Steele lives. The detail about her time in London was so fascinating to me, this is where the story really deviates from resemblance to Jane Eyre and also where Jane Steele undergoes a lot of pain and loss. The atmosphere was wonderful and I could picture myself there with Jane and the amazing cast of side characters.

When the action moved back to Highgate House it became, if possible, even more appealing to me. Much as I love Mr Rochester I have to say - Mr Thornfield appealed to me more. He was a more human character in my opinion, more sympathetic in many ways whilst also being incredibly strong and certainly a true match for Jane. The other characters, likewise had a great effect on Jane. She grew so much as a character throughout this book and I loved her every step of the way.

There is a mystery element to this book (no wives hidden in attics though) which I enjoyed. I actually didn't solve the mystery before the big reveal so there was a definite gasp-moment for me when everything was revealed. It's hard to really classify what genre this book would fall into however. It has mystery and romance and historical elements to it but to pigeon-hole it into any one of these seems way too constrictive. The romance was easily one of my favourite of the year so far. It was a fairly slow burn romance and I felt like they fit together in a great way - their personalities complemented each other.

Overall this was everything I had hoped it to be. Everything the taglines of "Reader I Murdered Him" and " Orphan. Governess. Serial Killer." had made me believe it would be. I can see myself re-reading this many times. In fact it may even become as worn out as my copy of Jane Eyre is!

You can also find us on Goodreads (Ann and Clare) to keep up with what we are reading
Posted by Dual Reads at 06:06

Email ThisBlogThis!Share to TwitterShare to FacebookShare to Pinterest
Labels: review