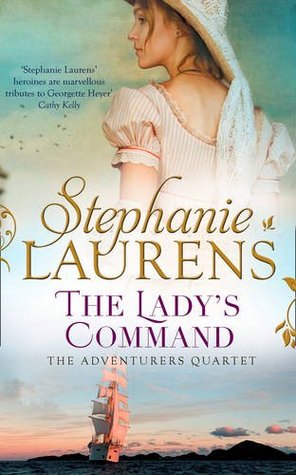 Title: The Lady's Command
Author: Stephanie Laurens
Series: The Adventurer's Quartet #1
Format: Paperback
Pages: 312
Rating: 2.5/5
Blurb: The instant Captain Declan Frobisher laid eyes on Lady Edwina Delbraith, he knew she was the lady he wanted as his wife. The scion of a seafaring dynasty accustomed to success, he discovered that wooing Edwina was surprisingly straightforward—not least because she made it plain that she wanted him as much as he wanted her.
Declan’s vision of marriage was of a gently-reared wife to grace his arm, to manage his household, and to bear his children. He assumed that household, children, and wife would remain safely in England while he continued his life as an explorer sailing the high seas.Declan got his wish—up to a point. He and Edwina were wed. As for the rest—his vision of marriage…Aunt of the young Duke of Ridgware and sister of the mysterious man known as Neville Roscoe, London’s gambling king, even before the knot was tied Edwina shattered the illusion that her character is as delicate, ethereal, and fragile as her appearance suggests. Far from adhering to orthodox mores, she and her ducal family are even more unconventional than the Frobishers.Beneath her fairy-princess exterior, Edwina possesses a spine of steel—one that might bend, but will never break. Born to the purple—born to rule—she’s determined to rule her life. With Declan’s ring on her finger, that means forging a marriage that meets her needs as well as his.But bare weeks into their honeymoon, Declan is required to sail to West Africa. Edwina decides she must accompany him.A secret mission with unknown villains flings unexpected dangers into their path as Declan and Edwina discover that meeting the challenge of making an unconventional marriage work requires something they both possess—bold and adventurous hearts.

“Marrying the lady of his dreams had proved suprisingly easy. Forging the marriage of his dreams…That, apparently was an entirely different challenge.”

It's generally hard for me to review regency romance books, I tend to go into them and enjoy them as just light-hearted and escapist and fun and not worry about any slightly repetitive writing or overly predictable plot lines. And I do usually enjoy Stephanie Laurens' books so it is frustrating that I just couldn't get into this one.

The romance is very different from her usual ones. The main characters are married and in love from the start so there is less tension with the relationship, however it does lead to arguably a more healthy relationship for the couple. I admired Edwina and I liked that Declan was, for the most part anyway, willing to listen to and respect her opinion. That's fairly unusal and very welcome for this genre. There was an element of romance and the relationship did develop and grow stronger over the course of the book but it just wasn't overly compelling.

The plot follows Declan as he is sent on a mission and Edwina tags along uninvited. The mystery itself wasn't particularly exciting. There were enough hints dropped that it was fairly easy to figure out who the villains of the piece were and it was frustrating that there was no real resolution. I understand that this is the first in the series and that the characters of the next book will pick up where Declan and Edwina left off - but the lack of resolution left me feeling fairly empty by the end.

There was a bit of repetition, especially with Declan's internal monologues but overall I didn't have many problems with the writing style itself and although I did occasionally want to skip through to get to the more exciting parts I didn't really struggle to read it. If you are a fan of Stephanie Laurens then I would recommend it but it's definitely my least favourite of her books to date. I will still be reading the sequel though and I am hopeful that I will enjoy it more.

You can also find us on Goodreads (Ann and Clare) to keep up with what we are reading
Posted by Dual Reads at 03:36