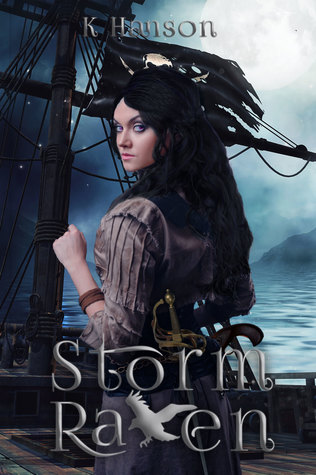 Title: Storm Raven
Author: K. Hanson
Series: Storm Raven #1
Source: Received from author for an honest review
Format: Paperback
Pages: 293
Rating: 4.5/5
Blurb: Captain Nereyda and her first mate, Brynja, lead a band of pirates as they seek out grand adventures and loot vulnerable merchant ships. However, when they attempt an overly ambitious raid, Nereyda and her crew are captured by Commander Erhan of the Imperial navy and separated. Nereyda is pressed into service aboard a ship to patrol the treacherous waters of the Shattered Sea. Meanwhile, Brynja and the rest of the crew are sent to a life of hellish labor deep in an Imperial mining prison camp.While serving her sentence, Nereyda is shipwrecked on an unknown island. As she explores it, she stumbles into some ancient ruins and finds…something. Whatever it is, it wakes a part of Nereyda that she had not felt before. Something that could help her free the rest of her crew and return to life on the sea, if only she can learn to control it. Unfortunately, Commander Erhan is also on the island. Nereyda must escape him, get off of the island, and rescue her crew before the commander can stop her and before her crew withers away in the oppressive mines.

This might just be the Pirate story I was hoping for. Nereyda was seriously badass and the sections we had of her with her crew were such pirate-y goodness. I was sad that wasn't the whole book, but  we must have a plot and it was a good one.

The introduction of magic should have felt sudden but it kinda worked within the progression of the story. It helps that Nereyda didn't have instant mastery of her powers, nor did she even really believe in them for a bit there. I half expected, from the blurb, that she would go full Mother-of-Dragons and single handedly storm the prisons. That didn't happen. Instead we got a lot of the things that I love. Ship-wrecked on an island, magical temples, pirates, prison-breaks. And betrayal.

The sections within the mines themselves were a bit unbearable for me. I'm extremely claustrophobic to the point where some books and films become completely unfinishable for me because they take place in confined spaces. Whilst I struggled with those sections, they were broken up by bits on the sea and in open air battle so that I was able to, metaphorically speaking, take a breath. The characters themselves didn't get that chance however and my heart broke for Nereyda's crew who were left underground whilst she struggled her way back to help them escape.

Brynja in particular is a difficult character to think about. Because I am so mad at her. She is twisted and hurt by the mines more than anyone and in her efforts to protect them she ends up doing some horrible things. And I understand her reasons but I can't help being mad at her. At the same time, I felt her resentment towards Nereyda who had a much easier time of it when imprisoned on board a ship. It wasn't fair and I felt that injustice properly.

I genuinely loved this book. More than I expected to. I felt everything that the characters felt. To the point where it became uncomfortable reading because I felt their guilt or their fear. I adored Nereyda and need more of her in my life and I am so desperate to see where their story goes next. And also if Erhan could just disappear that'd be grand. Thanks.

I'm so glad I read this book, and I am now very much looking forward to finding a chance to read the sequel! Many thanks to the author for sending me a copy for an honest review!
Posted by Dual Reads at 05:00