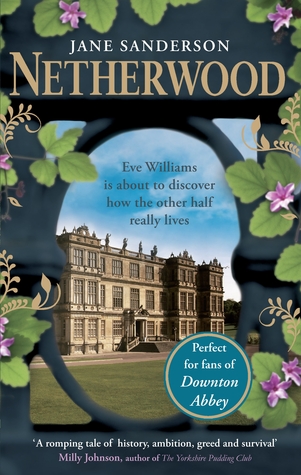 Blurb: Above Stairs: Lord Netherwood keeps his considerable fortune, and the upkeep of Netherwood Hall, ticking over with the profits from his three coal mines. The welfare of his employees isn't a pressing concern - more important is keeping his wife and daughters happy and ensuring the heir to the family wealth, the charming but feckless Tobias, stays out of trouble.

Below Stairs: Eve Williams is the wife of one of Lord Netherwood's employees. When her life is brought crashing down, Eve must look to her own self-sufficiency and talent to provide for her three young children. And it's then that 'upstairs' and 'downstairs' collide in truly dramatic fashion...

"The earl had bought a pie from her and asked after her family, and had behaved so entirely like an ordinary person that Eve began to wonder if the tales concerning his extraordinary fortune might be exaggerated."

The Good:
Eve was undoubtedly the best thing about this book. She was strong and independent minded and I loved that she never seemed to back down and always stayed true to herself and her family. Her friendship with Anna was an important part of the book and it was great to see how their differences complimented each other - driving them both forward.

The atmosphere was great, it was tense or sad or triumphant and I felt all those and more. One of my favourite scenes was the one I showed in our Friday 56 for last week, which you can find here if you're interested. There was a fair element of humour, although it wasn't the laugh out loud kind - it was more the wry kind, like Anna (who is Russian) struggling with colloquialisms or sarcasm. It made the book feel slightly cozy, and very realistic. Eve feels like a real person to me and so did the setting and plot.

The Bad:
I would say that whilst I enjoyed Eve's sections I felt like the 'upstairs' sections were, if not unnecessary, at least fairly boring or undeveloped compared to Eve's portion. 'Upstairs' and 'Downstairs' didn't so much "collide in truly dramatic fashion" as trundle along next to each other without much interaction. Having glanced at the blurb's for the sequels I think that the Earl and his family get a little more of a plot of their own in future books but I could quite happily have read a book entirely about Eve, with the Earl popping in every so often to buy pies!

The ending of this book was a fairly complete one, and although there were hints of what would come in the future I am not sure yet whether I am likely to continue the series. I felt like it ended (or Eve's story did at least) in a good place and I know that if I were to read on her life would be disrupted, and part of me just wants to leave her where she is.

And The Delicious:
Holy wow am I hungry after finishing this book. A huge portion of the book was based around Eve's apparently amazing cooking skills. And all I can say is I have never been quite so hungry whilst reading a book. There are recipes at the back of the book for some of the food she made - which I am seriously considering trying out! The food was as well described as Eve and the settings - which means I could practically smell the beef stew.

This book has been described as "Perfect for fans of Downton Abbey" and whilst I wouldn't say the two are overly similar in plot or character - the general feeling of them is somewhat the same. So if you are a fan of Downton Abbey, or period drama in general I highly recommend reading this book.