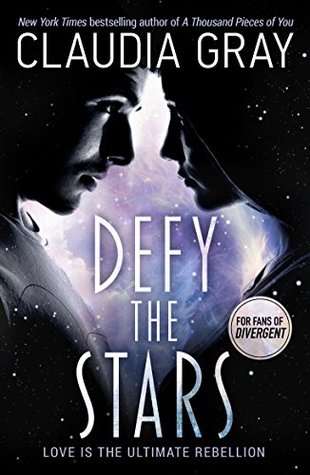 Title: Defy the Stars
Author: Claudia Gray
Format: E-book
Source: Received for an honest review via Netgalley
Pages: 512
Rating: 3.5/5
Blurb: Noemi is a young and fearless soldier of Genesis, a colony planet of a dying Earth. But the citizens of Genesis are rising up - they know that Earth's settlers will only destroy this planet the way they destroyed their own. And so a terrible war has begun.
When Noemi meets Abel, one of Earth's robotic mech warriors, she realizes that Abel himself may provide the key to Genesis' salvation. Abel is bound by his programming to obey her - even though her plan could result in his destruction. But Abel is no ordinary mech. He's a unique prototype, one with greater intelligence, skill and strength than any other. More than that, he has begun to develop emotions, a personality and even dreams. Noemi begins to realise that if Abel is less than human, he is more than a machine. If she destroys him, is it murder? And can a cold-blooded murder be redeemed by the protection of a world?


Stranded together in space, they go on a whirlwind adventure through Earth's various colony worlds, alongside the countless Vagabonds who have given up planetary life altogether and sail forever between the stars. Each step brings them closer - both to each other and to the terrible decision Noemi will have to make about her world's fate, and Abel's.

The hardest reviews for me to write are the ones where I am, frankly, underwhelmed. Which is, unfortunately, how I feel about Defy the Stars. I just never grew to care. And whilst at least part of that is probably down to personal preference and I am sure that some people will connect with Noemi and Abel - I just couldn't.

What I liked about Defy the Stars, and what immediately struck me about it, was that it's very based around Earth-culture. Which is fairly unusual for Sci-Fi. Sometimes you will get distant mentions of Earth but very often it is a whole new set of societal rules and science. Here we had many religions such as Islam and Catholicism as well as references to movies (Abel loves Casablanca and who can blame him?). I also really liked that in a big way Earth is actually the villain. Or the people of Earth anyway. Having destroyed our own planet we are now going around attempting to colonise (and eventually destroy) other planets. Which honestly is very believable.

Noemi was, for me, the most likable of the two characters. Weirdly, because she was less likable. I know - my logic never makes much sense. She was tough and unfeeling most of the time, useless at platitudes or attempts to make others feel better. But she had a difficult life in many ways and her love for her foster-sister was very real and sweet. Abel on the other hand didn't really grab me. He was sweet at times and funny at others but I just never connected with him as a character. I didn't feel any sense of urgency about any of the characters know which made life and death moments very unemotional for me.

I did quite like the world building - as I mentioned the Earth aspects felt realistic and the other cultures were diverse and interesting so that I felt like they made a lot of sense too. But this is what I mean - there was nothing to really dislike about Defy the Stars. I just didn't like it either. If you're a fan of Sci-Fi in general, especially books like Illuminae or Starflight then I'd say give this a try, there are plenty of great reviews for this on Goodreads so it is evidently working for many people and I really do feel like this was a "it's not you it's me" reading situation.

You can also find us on Goodreads (Ann and Clare), Facebook and Instagram to keep up with what we are reading.
Posted by Dual Reads at 01:02