Clare Reviews: The Lie and the Lady by Kate Noble 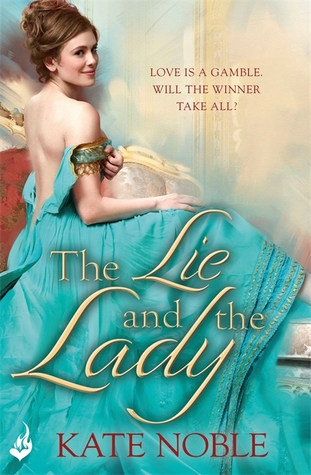 Title: The Lie and the Lady
Author: Kate Noble
Series: Winner Takes All #2
Source: Received from publisher for honest review
Pages: 372
Rating: 3.5/5
Blurb: John Turner was thinking only of winning a bet when he swapped identities with his friend, the Earl of Ashby. He didn’t wager on winning the fiery Countess of Churzy’s heart with his lies, or on falling for her in return.


Leticia, impoverished Countess of Churzy, was publicly humiliated when it came out that she had fallen for the man, not the master. She fled when she learned of his betrayal. But fate throws them together again, and some things are too intoxicating to be denied.
John is determined to regain her trust—and her love—this time as himself. Letty knows what choice she must make to survive, but if she turns her back on her dashing rogue – again – will she loose her chance at love forever?

Regency romance is my ultimate guilty pleasure read. My love affair started with Georgette Heyer and has since expanded to include favourites like Julia Quinn and Stephanie Laurens. But I've never read Kate Noble before. Having learned that she worked on the Lizzie Bennet Diaries I knew she was an author I had to try.

This is the second book in a series and there are references to the first book but it is possible to read it as a stand-alone which is what I did. Although this didn't affect my understanding of the book or my enjoyment of the characters - I do wish that I had read the first book previously as I feel there was a lot of backstory there that, though we are kept up to date on, I would have liked to experience. I will probably be trying to get a hold of the first book soon - and will definitely be checking out the third book which is about two characters in this one I grew to love.

Firstly it should be mentioned that this is fairly different from a lot of other regency romance. This is definitely a slow-burn love affair despite the fact that these characters are already in love (sort-of) at the start of the book. The main characters don't interact a lot for the first half of the book but every one of their interactions throughout is such a joy to read - whether they're arguing or on the same side. Leticia, the countess, was a great character. She is a fortune hunter and, as another character notes, can be very selfish and calculating. But, as I love my characters flawed, this was more of  a pro to me than anything. John, the Miller, was somehow less appealing to me. Perhaps its that we don't spend a lot of time with him at the beginning but although he was perfectly likable - I never grew to love him. The side characters were all wonderful and very well written, from Leticia's lovable fiance to her almost-step-daughter they felt like fleshed out, real people. This is certainly a benefit when two of them are going to be the stars of the next book.

I did feel like the mystery half of the plot appeared too much in the middle and I was a bit surprised by it at first - it was also fairly obvious who the evil-doers were which meant that part of the plot took a bit of a back seat to the entanglements of our main couple. I would have liked a bit more tension but I appreciated that this wasn't just a romance novel - the added element was good if not as well developed as I would have liked.

Overall this was a great, fun read and I will definitely be looking for more from Kate Noble. She may not have immediately leaped to the top of my favourites list - but she has definitely become an author I will keep my eye out for. If you enjoy romance novels - particularly if you'd rather your main characters don't kiss until nearly the end of the book - and if you like some Austen undertones - then I definitely recommend this book.